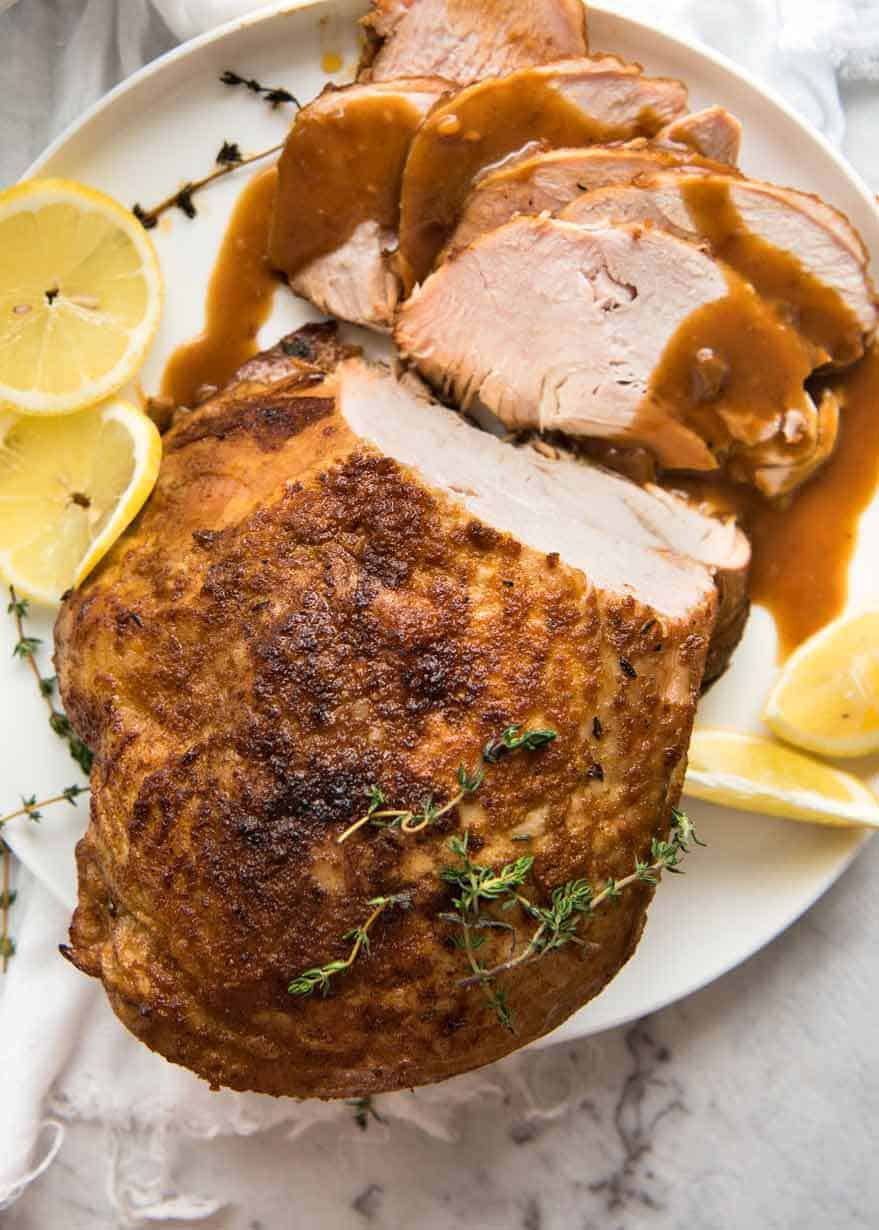 This Slow Cooker Turkey Breast is without a doubt, this is the easiest, safest and tastiest way to cook turkey breast without brining. Its moist and juicy,takes 3minutes to prepare, thenjust leave it to cook in your slow cooker (crock pot). Then use the juices to make a killer gravy!

Even if youre a first timer, you can have confidence in this turkey breast recipe its been viewed over 3 million times and has hundreds of glowing reviews!

Turkey breast is notoriously lean so the only way to guarantee it comes out juicy if you roast it in the oven is to brine it dry or wet brine. If you dont brine it, then even if you use a meat thermometer, it is extremely difficult to roast the turkey breast perfectly.

I created this Slow Cooker Turkey Breastafter trying a handful of recipes for turkey breast and being disappointed by the bland looking skin, dry meat and mediocre gravy. So I tossed out everything Id read and decided to come up with my own version using a slow cooker. This is by far thejuiciestturkey breast Ive ever had without brining.And my friends agreed!

Its almost magical how a recipe this simple can yield such extraordinary results. Moist turkey with incredible flavour and a gravy thats off the charts! 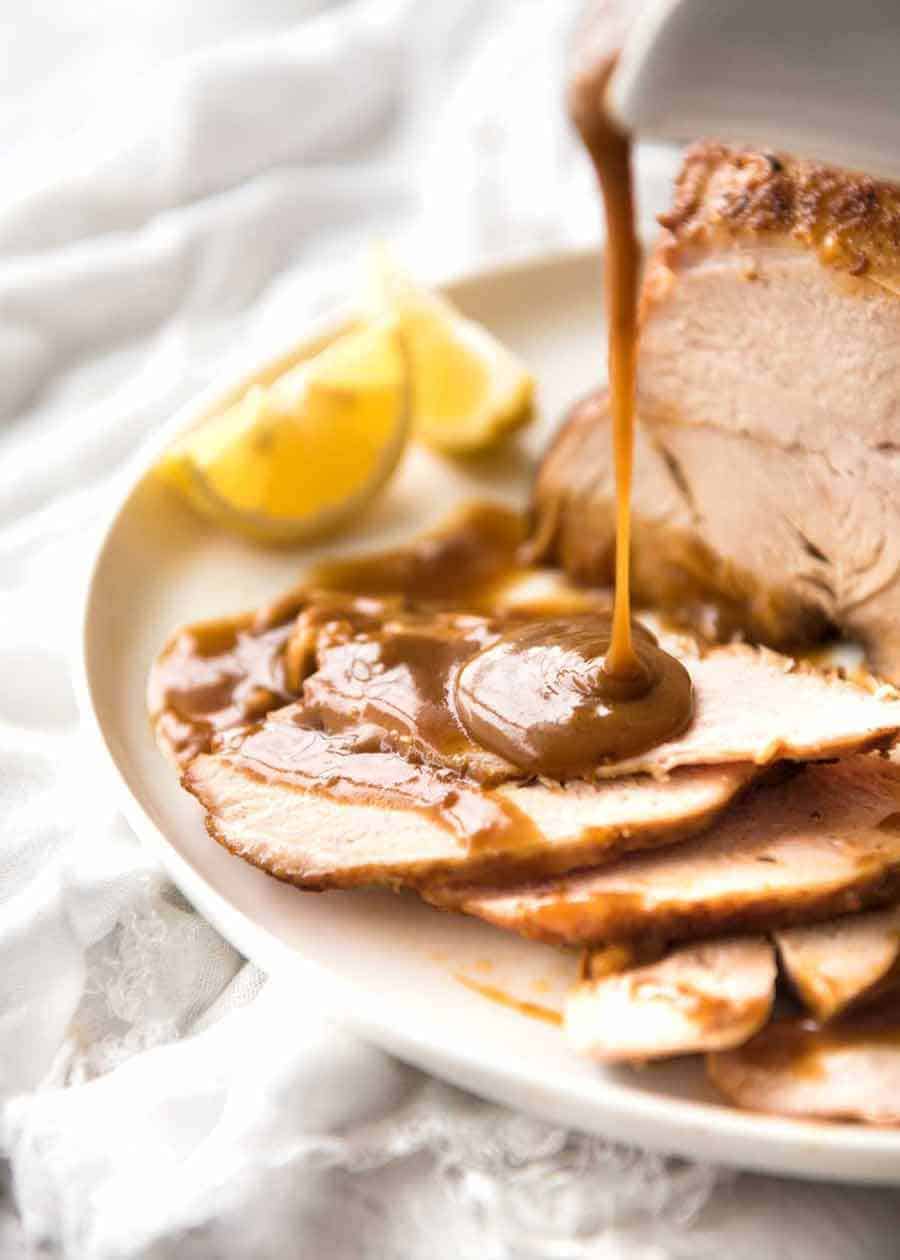 How long to cook turkey breast in the slow cooker

A 2 kg / 4 l2b turkey breast will take 5 to 6 hours on LOW in a slow cooker. Check the internal temperature at 5 hours. See recipe notes for cook times for other sizes.

I promised you easy and easy it is! Heres how it goes down:

PS Thats a multi function cooker you see. I use the slow cooker function for this recipe. 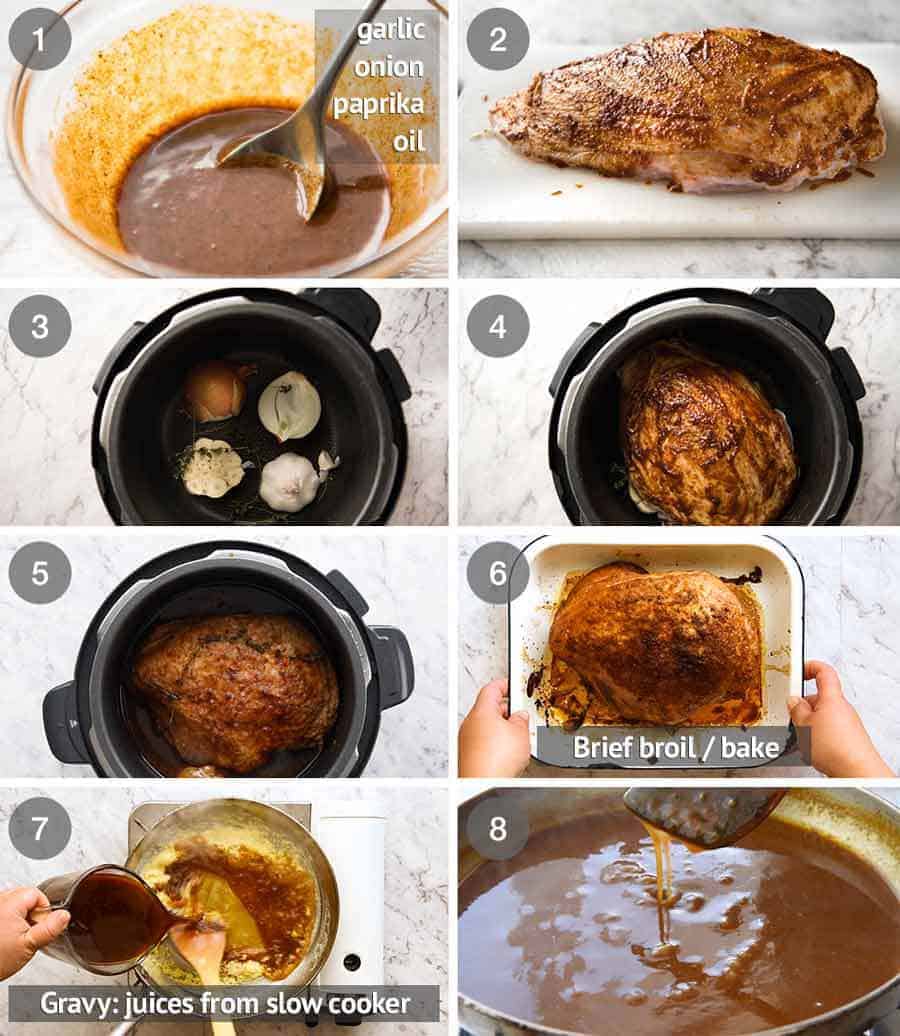 Click or tap onServings on the recipe. Then slide until the turkey reaches the weight of your turkey. It will change all the ingredient quantities for you! Then refer to the recipe notes for the right cook time for your turkey. 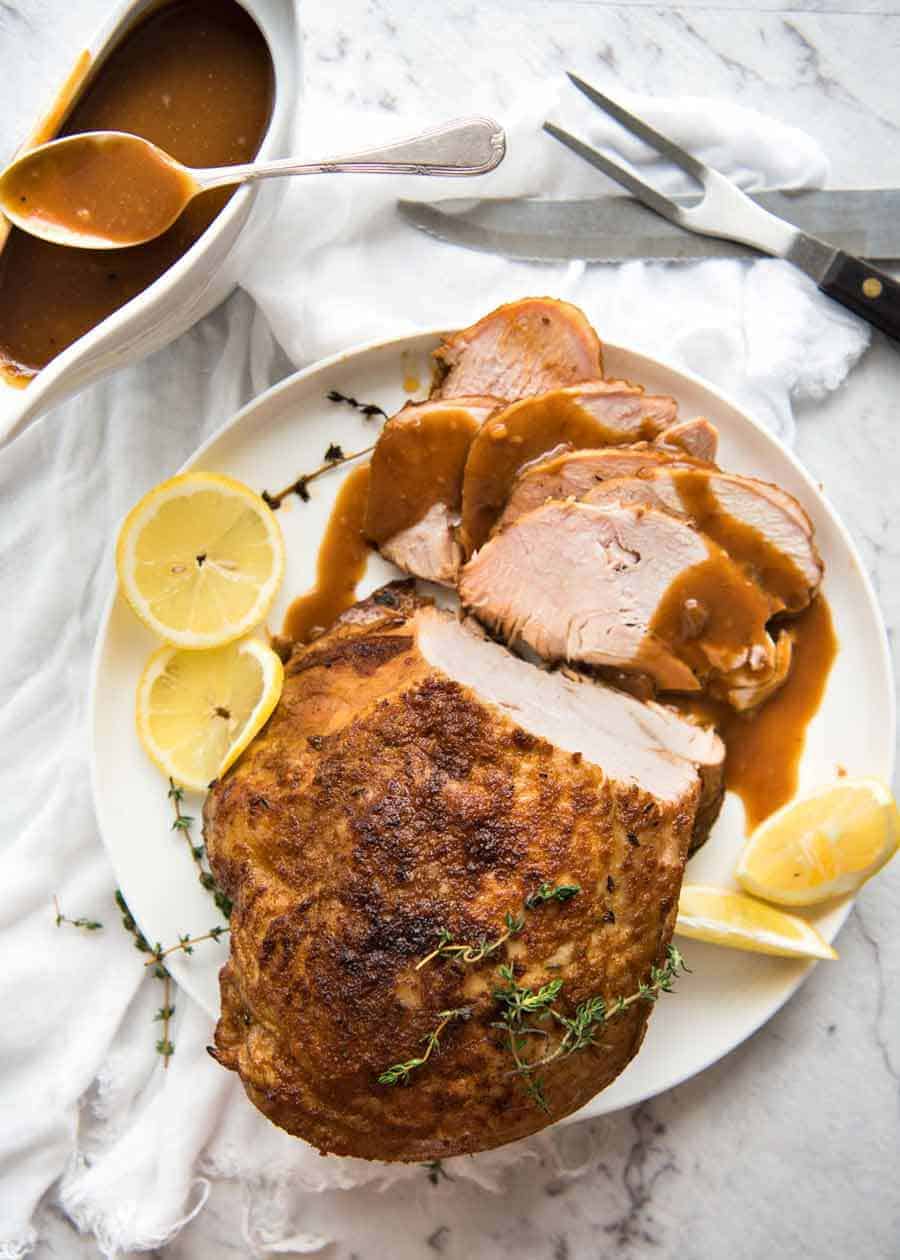 A safe recipe even for first timers

Turkey is more often than not a centrepieces for holiday feasting in manyhouseholds around the world. So I know it can be nerve racking, trying a new recipe.

But you can have Confidence in this Slow Cooker Turkey Breast recipe. Its been viewed over 3 million times since I first published, theres hundreds of fantastic reviews, its asimple recipe and theres a recipe video below to guide you through it step by step.

And in all honesty worst case? Your turkey goes a bit over and its not as juicy as you hoped. Of course, Im doing everything in my power to help avoid this including sending over virtual positive vibes.

But if it does dont fret!That Turkey Gravy is so insanely good, it will totally make up for it! Nagi x

SLOW COOKER: Many people have said that my slow cooker looks like a pressure cooker. They are actually correct, it is a slow cooker and pressure cooker in one (but no, it is not an Instant Pot). It is called a Breville Fast-Slow Cooker (its an Australian product). I use the slow cooker function for this recipe. 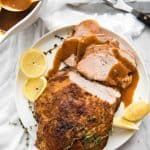 RECIPE VIDEO above. Ive tried a handful of other methods over the years. This has produced the juiciest turkey breast by far, without brining the breast in advance. Plus slow cooking is very forgiving so you dont need to be spot on with the cooking time. SCALE RECIPE by moving slider on Servings to adjust for different turkey weights. Complete your feast browse the new Thanksgiving Recipe Index!

1. Turkey breast can come in all sorts of sizes and cuts. A single boneless breast can be as small as 1 kg / 2 lb. A double bone in breast (also known as turkey buffe or crown) can be as large as 6 kg / 12 lb. In Australia, turkey breast can also come with the leg still attached, which is what I have used in the past so you may see some photos floating around on my site with a drumstick attached to the breast.

This can be made with any cut of turkey breast but it needs to have skin if you want the nice colour you see in the photos.

BRINED TURKEY: If you buy a frozen turkey breast from the supermarket that comes in a box, check to see if thethe breast is already brined (i.e. marinated in salty water to make it more moist once cooked). Check the label / ask the butcher if the ingredients include salt, your turkey is brined. Here in Australia, generally anything that is sold in boxes / vac packed in the frozen section of supermarkets (e.g. Steggles), it is brined.

If it has been brined, no problems, just cut the salt in half. But if its been preseason with another sort of rub, Id suggest either scraping the rub off before adding my rub.

2. Making ahead: Because turkey is so lean, it is far better made as close as possible to serving time. But if you need to make ahead, slow cook the turkey but do not brown the skin. Cover and store in the refrigerator overnight, then bring to room temperature. Cover with cling wrap and microwave for 3 minutes on LOW (if high, you run the risk of drying out the edges of the turkey), then grill/broil per instructions to brown and crisp the skin. The gravy can also be made ahead then reheated in a saucepan or in the microwave.

3. COOK TIMES: Ready when the internal temp is 165F/75C. Slow cookers are very forgiving so dont stress too much about cooking time, an hour or 2 over and it will still be moist. The worst that might happen is that the meat falls apart a bit when you lift it out of the slow cooker, but still juicy! DO NOT try to save time by using HIGH!

4. No water is required for this, the turkey steams in its own juices. It wont dry out or burn but it is important to elevate the breast off the bottom with the onion and garlic!

6. Nutrition per serving, including gravy.

Originally published November 2016. Updated for some housekeeping November 2019 no change to recipe. 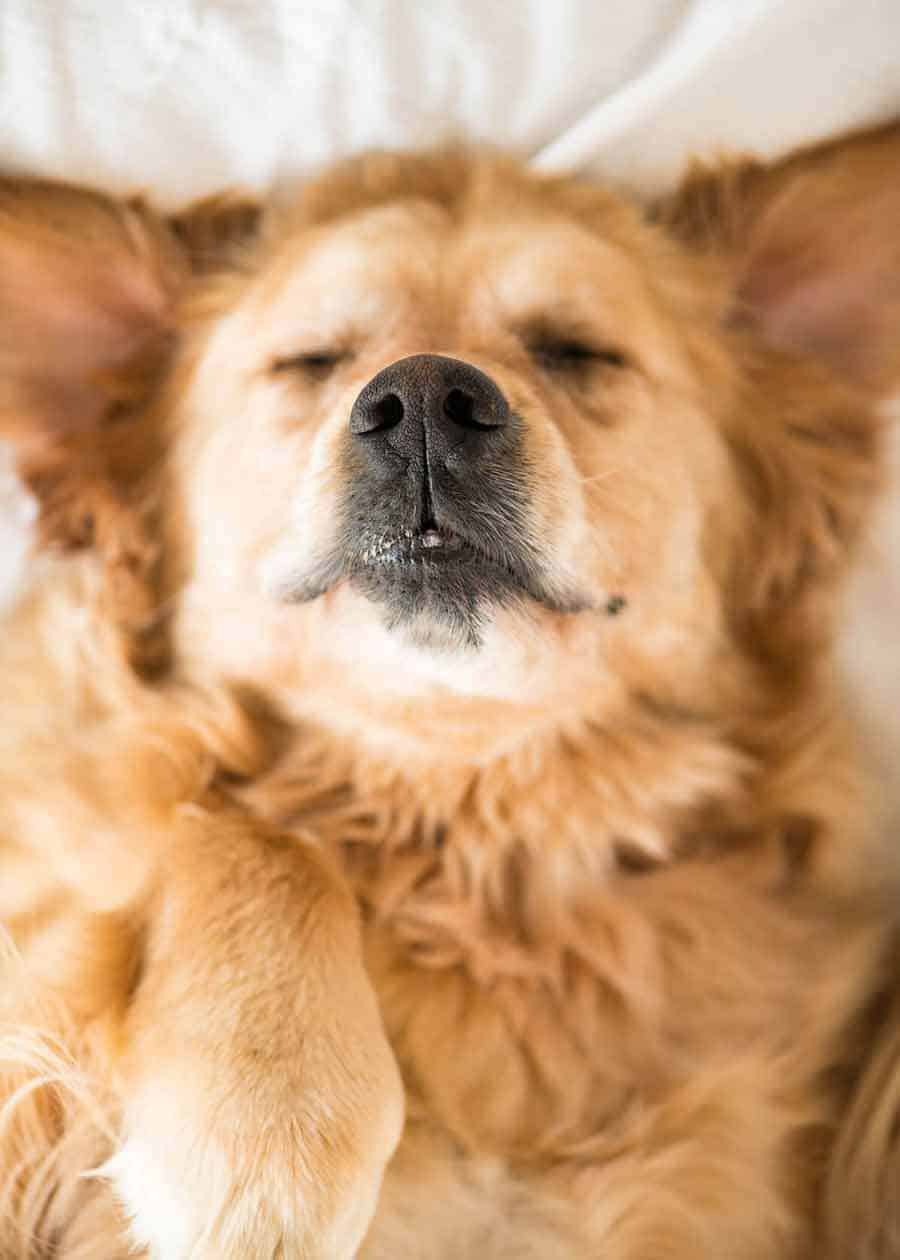