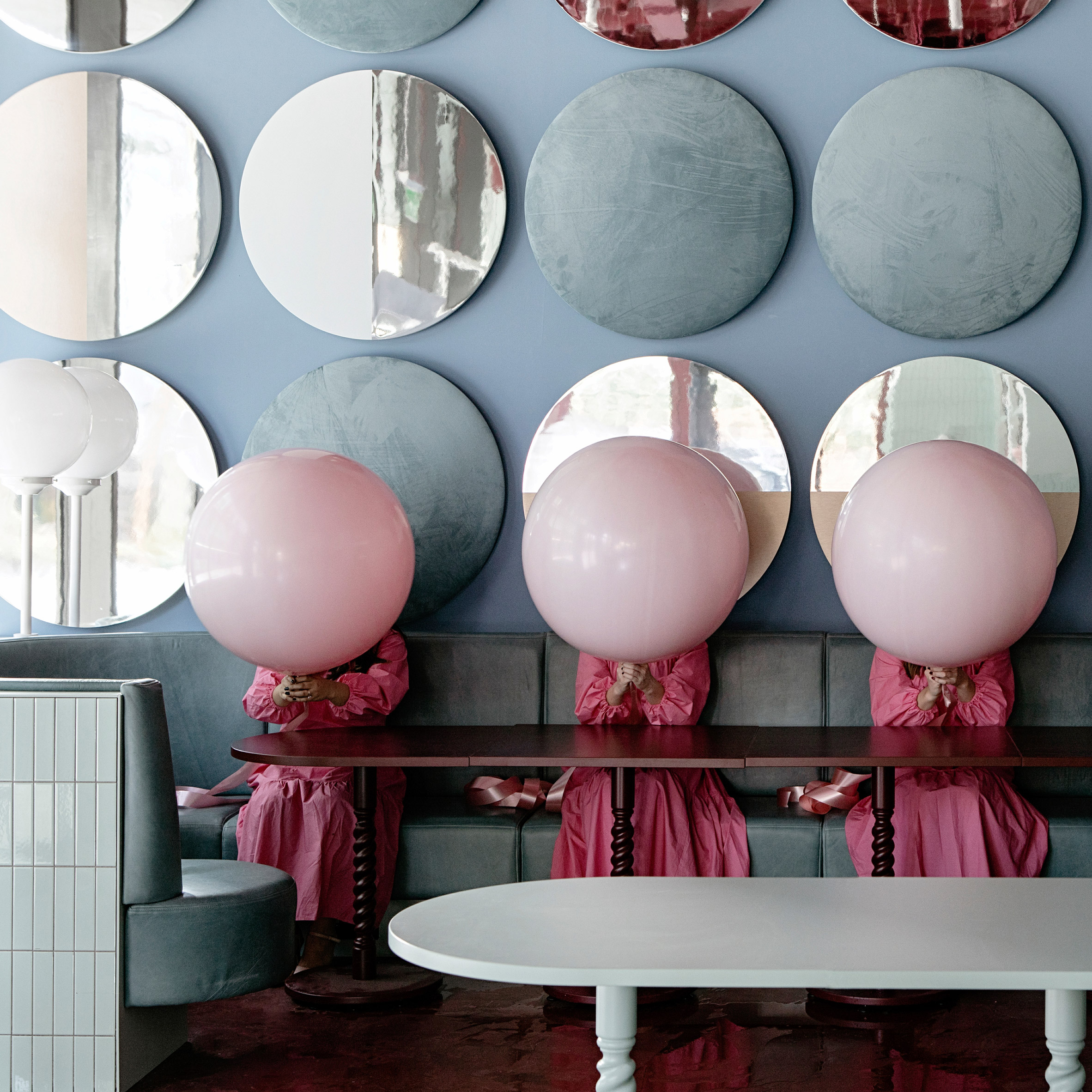 Oversized lollipop-like lamps and a "dollhouse-effect" entryway feature inside this restaurant in Dublin, Ireland, which Kingston Lafferty Design has completed with whimsical interiors.

Cinnamon is situated in the city's lively Ballsbridge neighbourhood and takes over an empty retail unit. 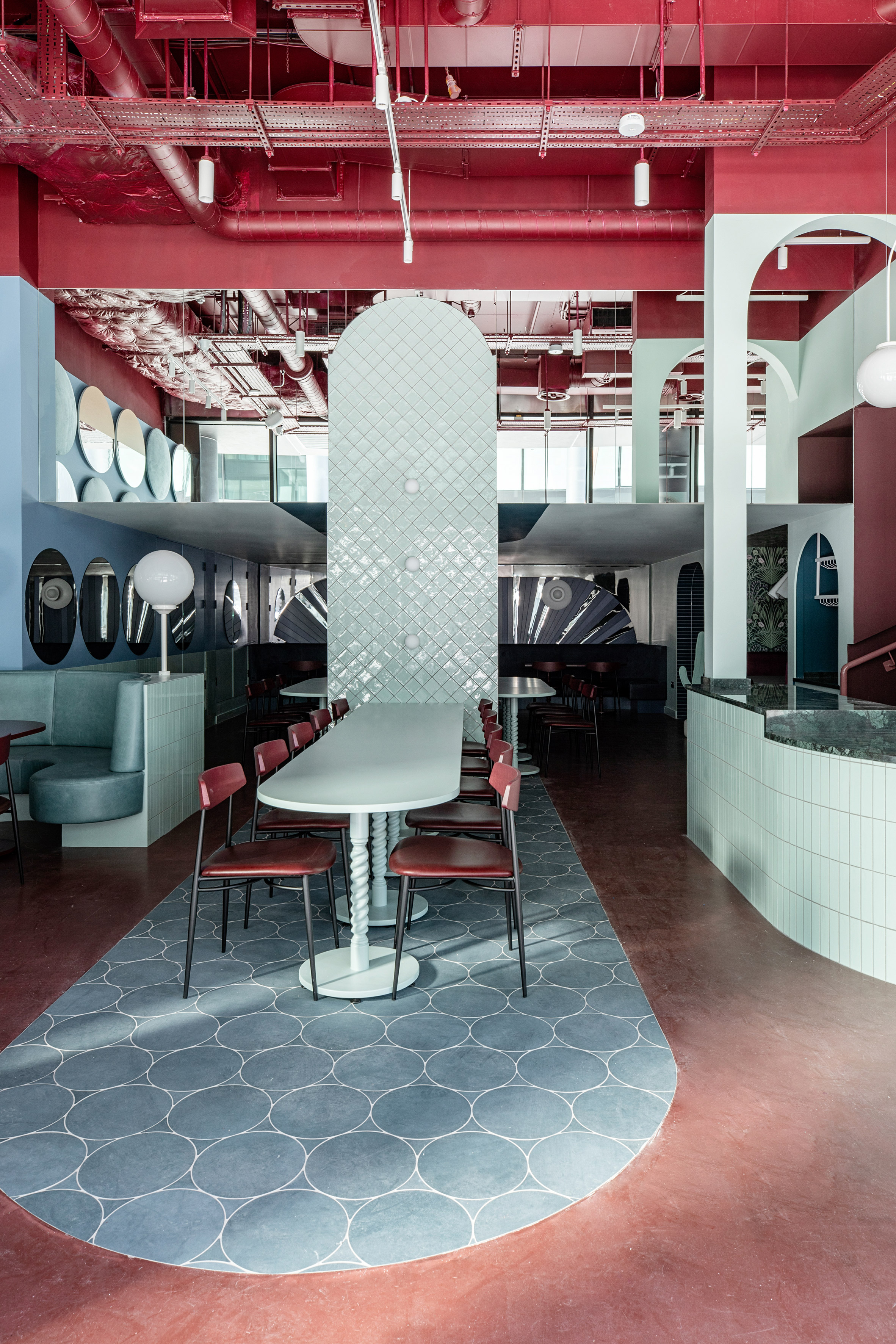 Kingston Lafferty Design set about transforming the characterless space into a "celebration of playfulness and humour", drawing upon the aesthetic of surrealist artworks and the bright, psychedelic interiors fashioned by Danish designer Verner Panton in the late 1960s.

"We wanted to create an imaginary and dreamlike world, where shapes appear to float within and nothing is quite what it seems," the studio's founder, Roisin Lafferty, told Dezeen. 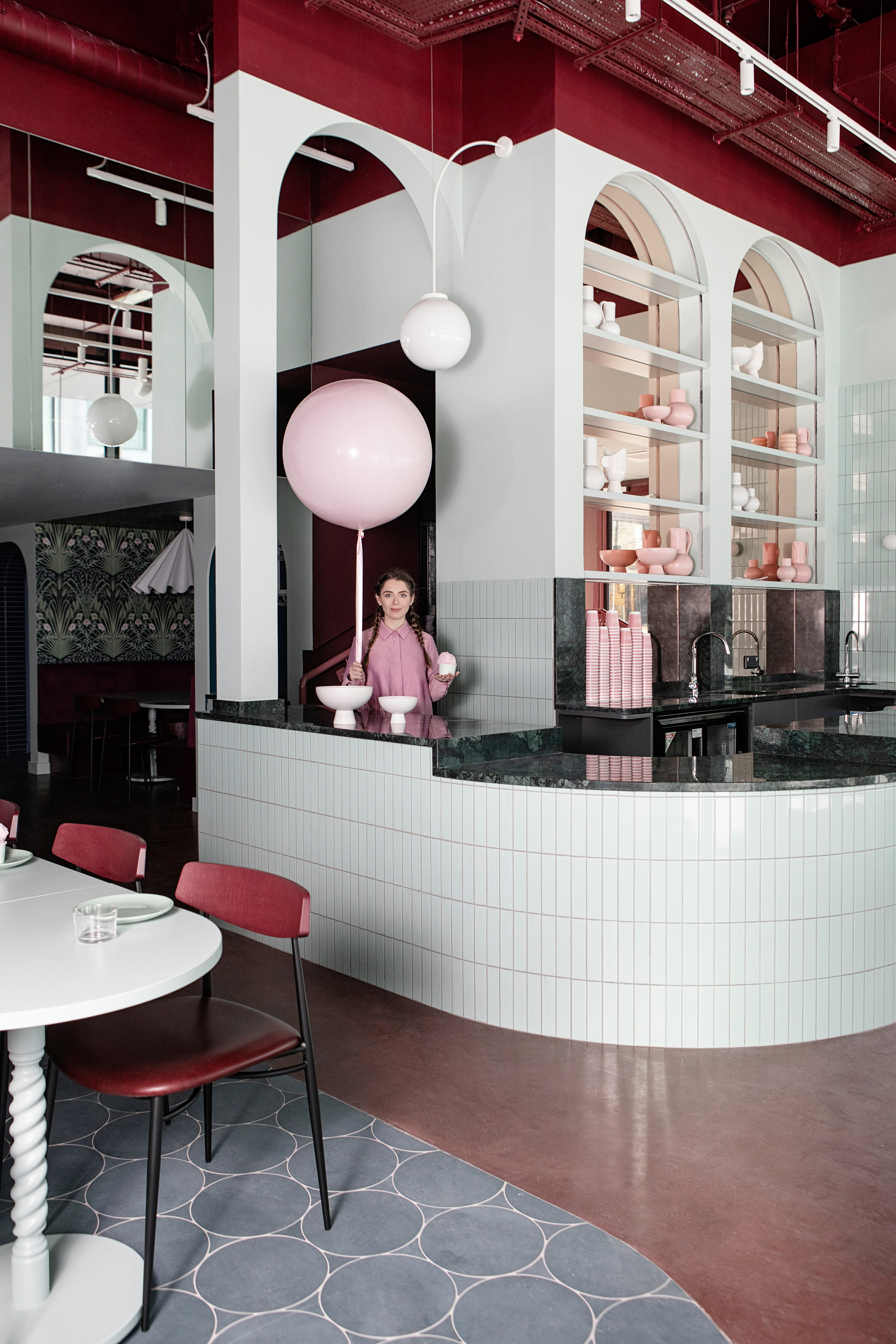 Cinnamon's kitchen has been set at mezzanine level towards the rear of the plan, leaving a dramatic double-height dining area at the restaurant's entrance.

With its ceiling measuring four metres in height, the studio hopes the scale of the space will create a "dollhouse effect" that makes visitors feel "miniature". 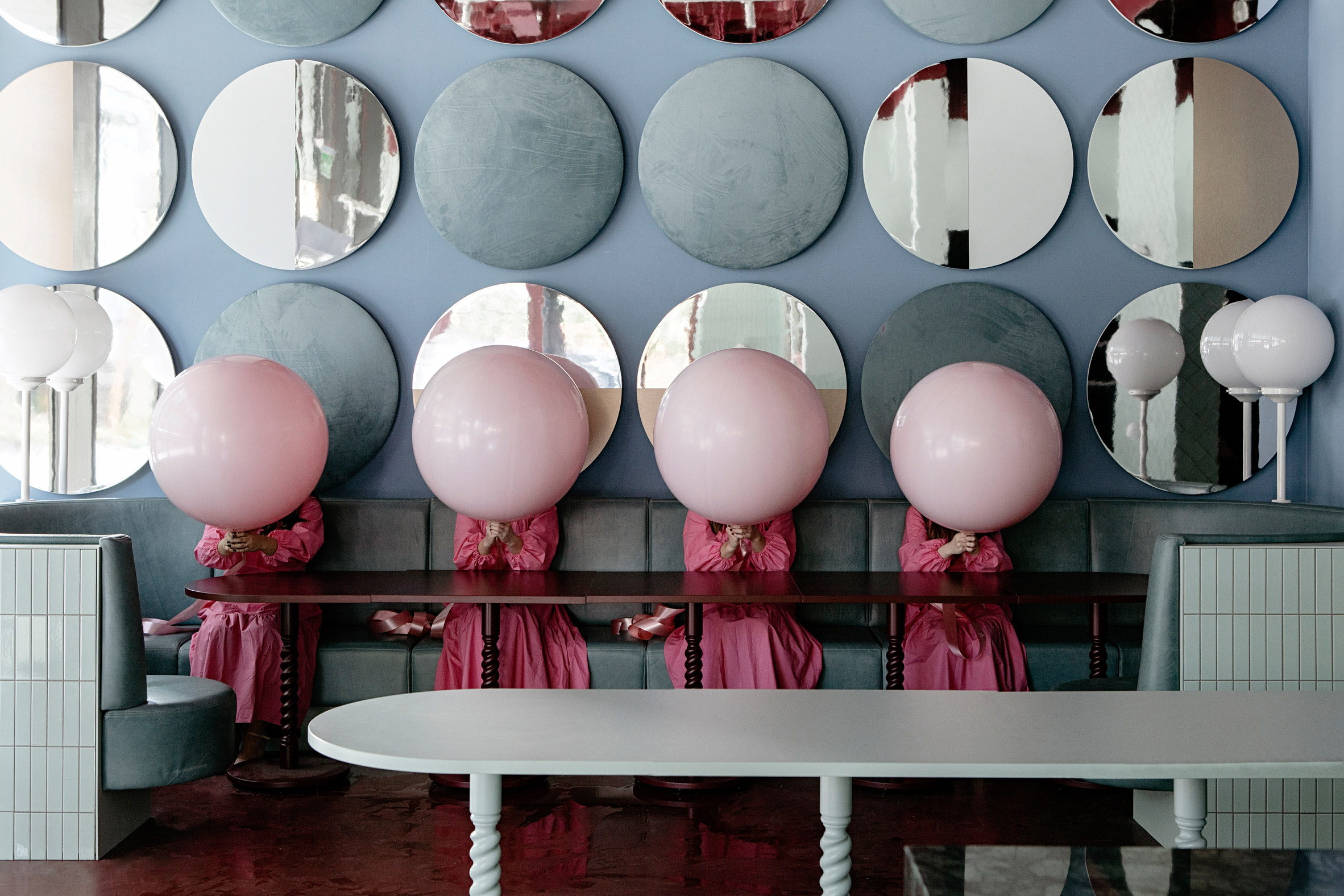 This is enhanced by a number of large-scale furnishings. One side of the space is dominated by a chunky service counter where takeaway orders are made – its curved base is clad with mint-green tiles, while the surfacetop is crafted from emerald-coloured marble.

Behind lies a couple of towering arched niches where pastel-hued ornaments are displayed. 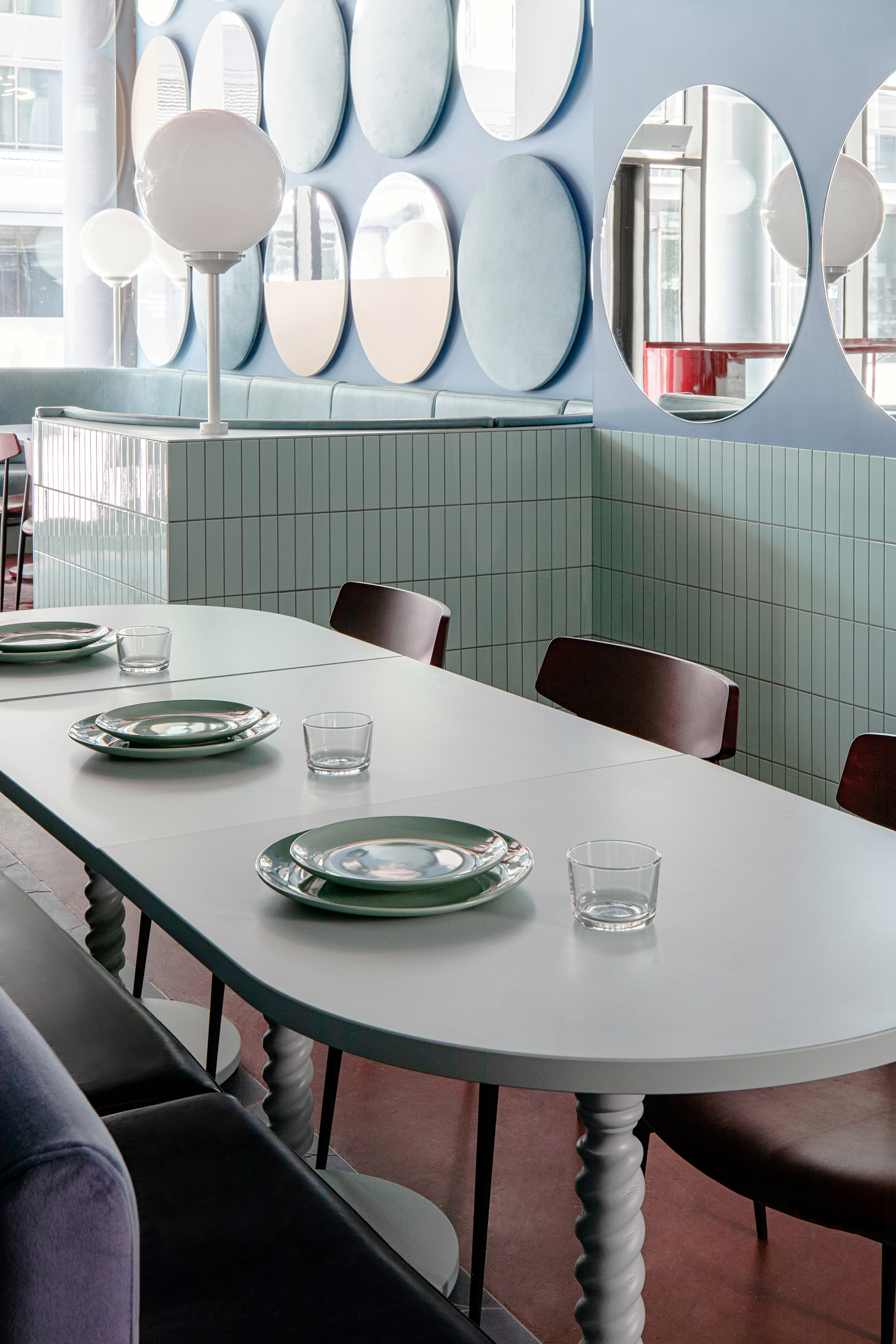 The other side of the room features a huge seating banquette upholstered in teal-blue leather.

It backs onto a wall that's mounted with rows of large, round disks which the studio likens to oversized buttons. Some of them have been upholstered in suede-like blue fabric, while others are clad with shiny mirror.

The circular form is echoed in the patterned lino that's been inlaid in parts of the floor and the restaurant's bulbous white lamps, which are intended to recall giant lollipops. 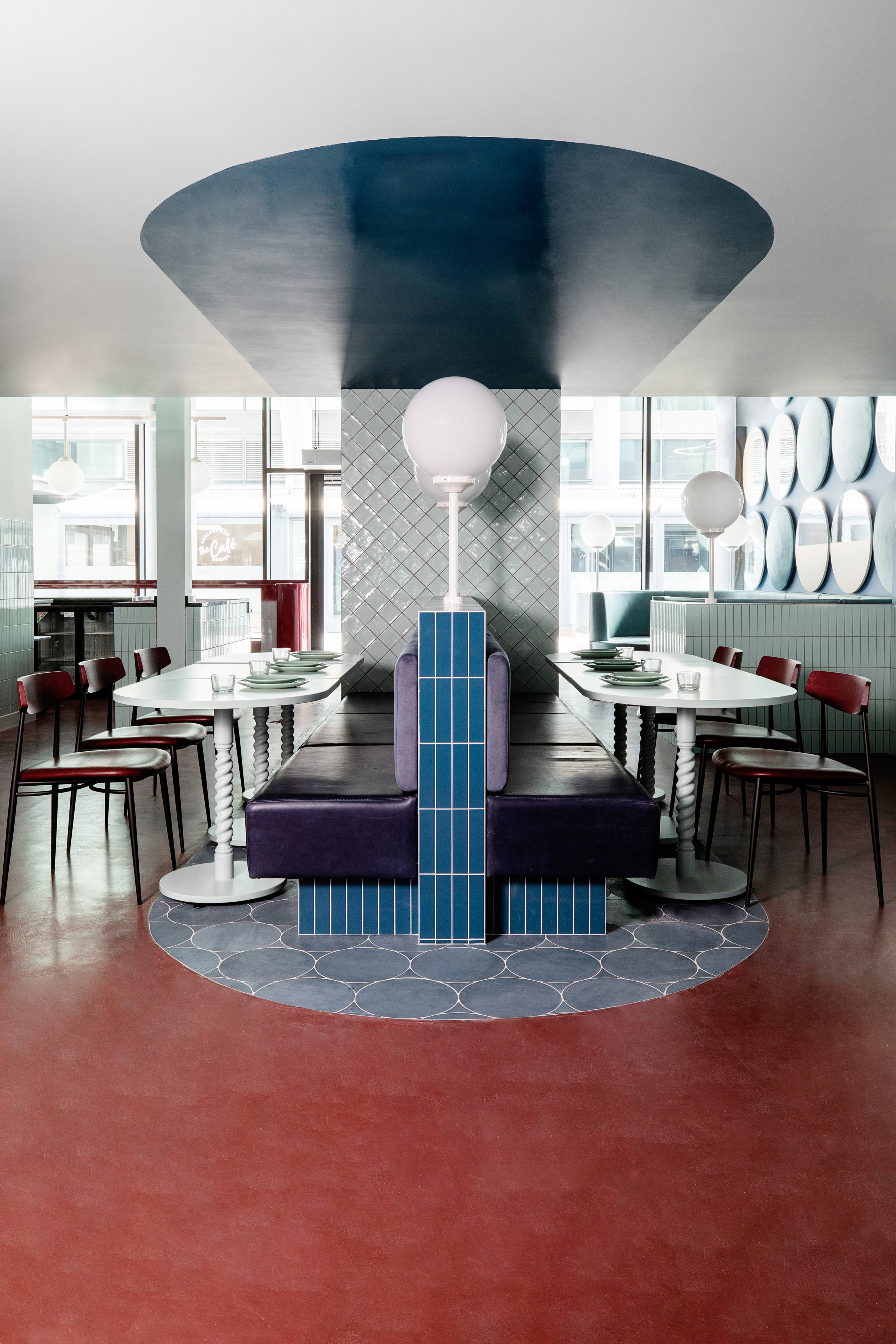 A communal table surrounded by deep-red dining chairs has been slotted up against a central partition covered with diamond-shaped glazed tiles.

Beyond this lies a series of more intimate seating areas, tucked beneath the mezzanine-level kitchen. 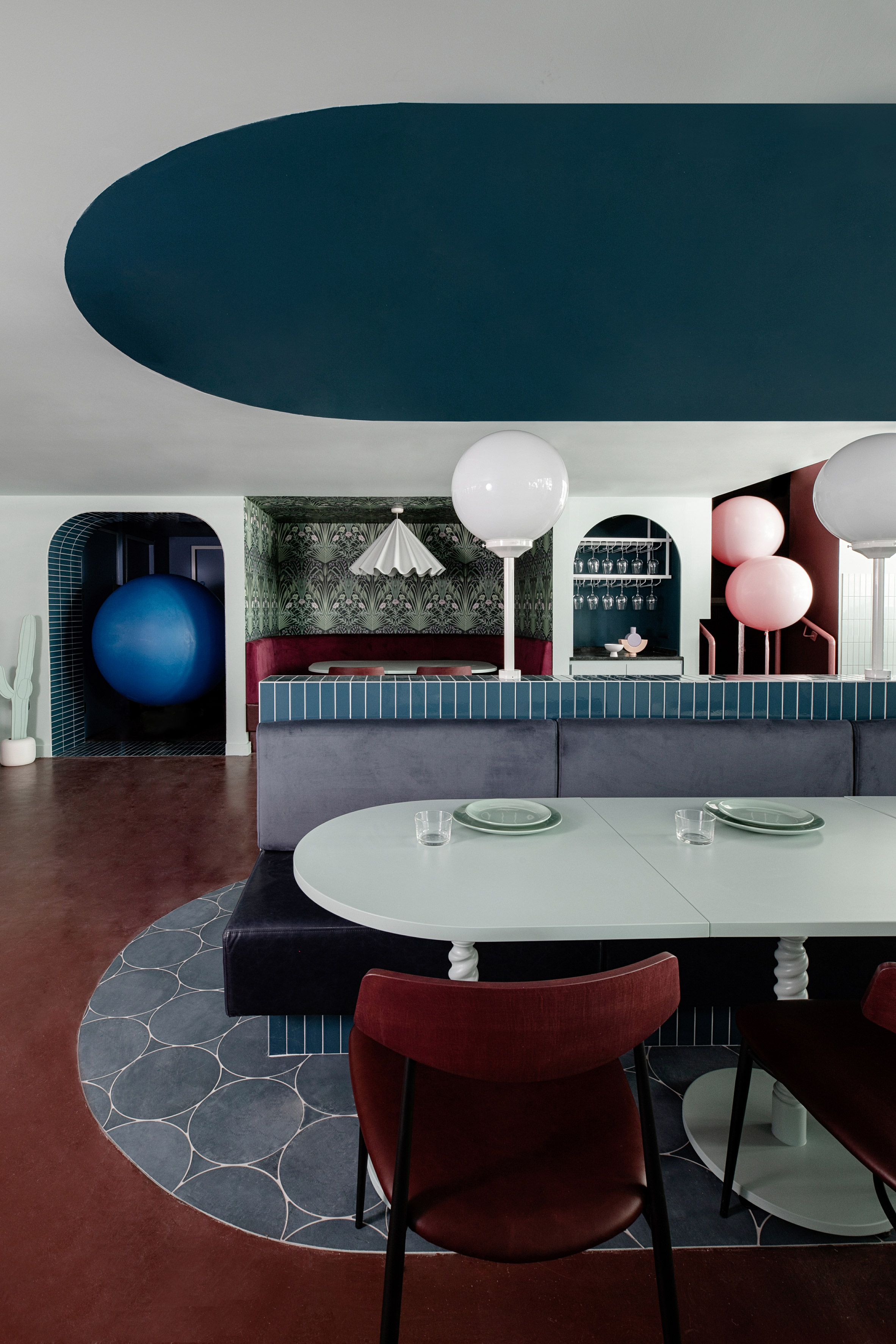 This includes a cosy booth that's been inset into a peripheral wall. Its lower half is lined with crimson velvet, while the upper half boasts wallpaper printed with pink flowers and palm fronds. 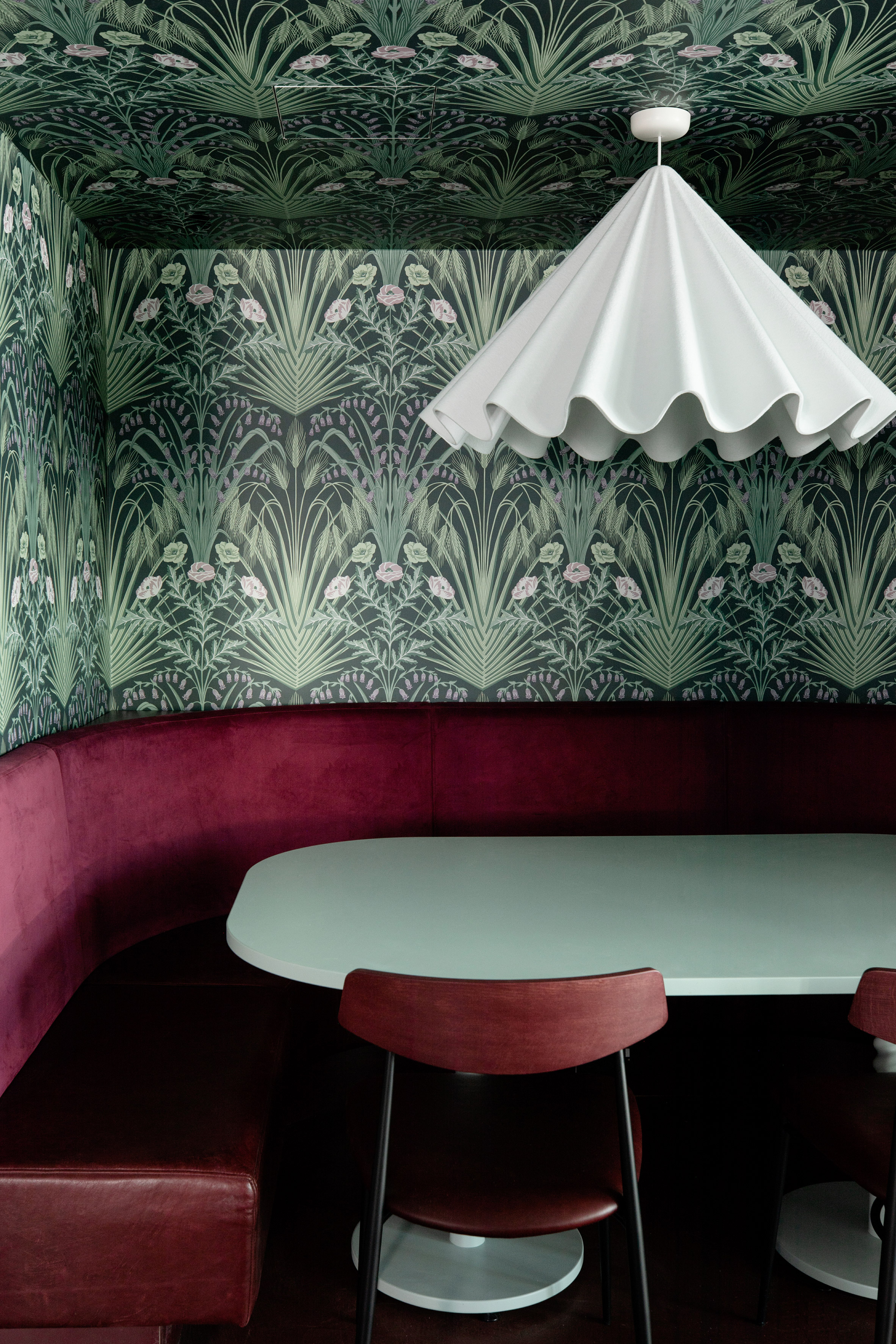 Blue-painted and mirrored panels have then been arranged in a sunburst shape across the rear wall of the room, forming a bold backdrop for another long purple seating banquette.

Each of the accompanying tables has twisted legs that resemble the poles of a fairground carousel ride. 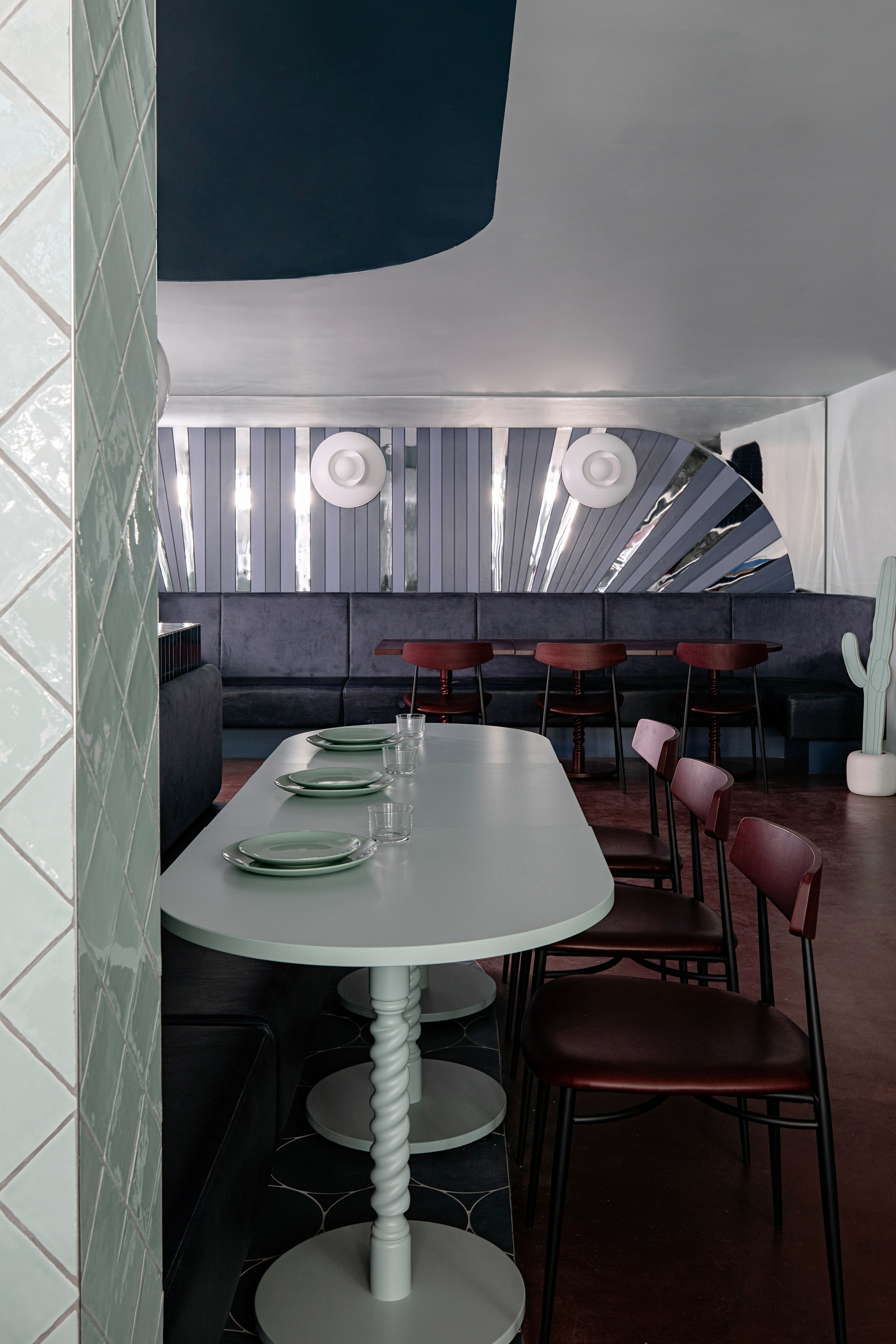 Kingston Lafferty Design was established by Roisin Lafferty in 2010. The studio's Cinnamon project isn't the only fanciful eatery.

Others include the Unlocked restaurant designed by Renesa, which takes cues from video games, and the Lolly-Laputan cafe by Wutopia Lab, which has interiors based on a child's drawing of a fairyland.

Photography is by Ruth Maria Murphy.