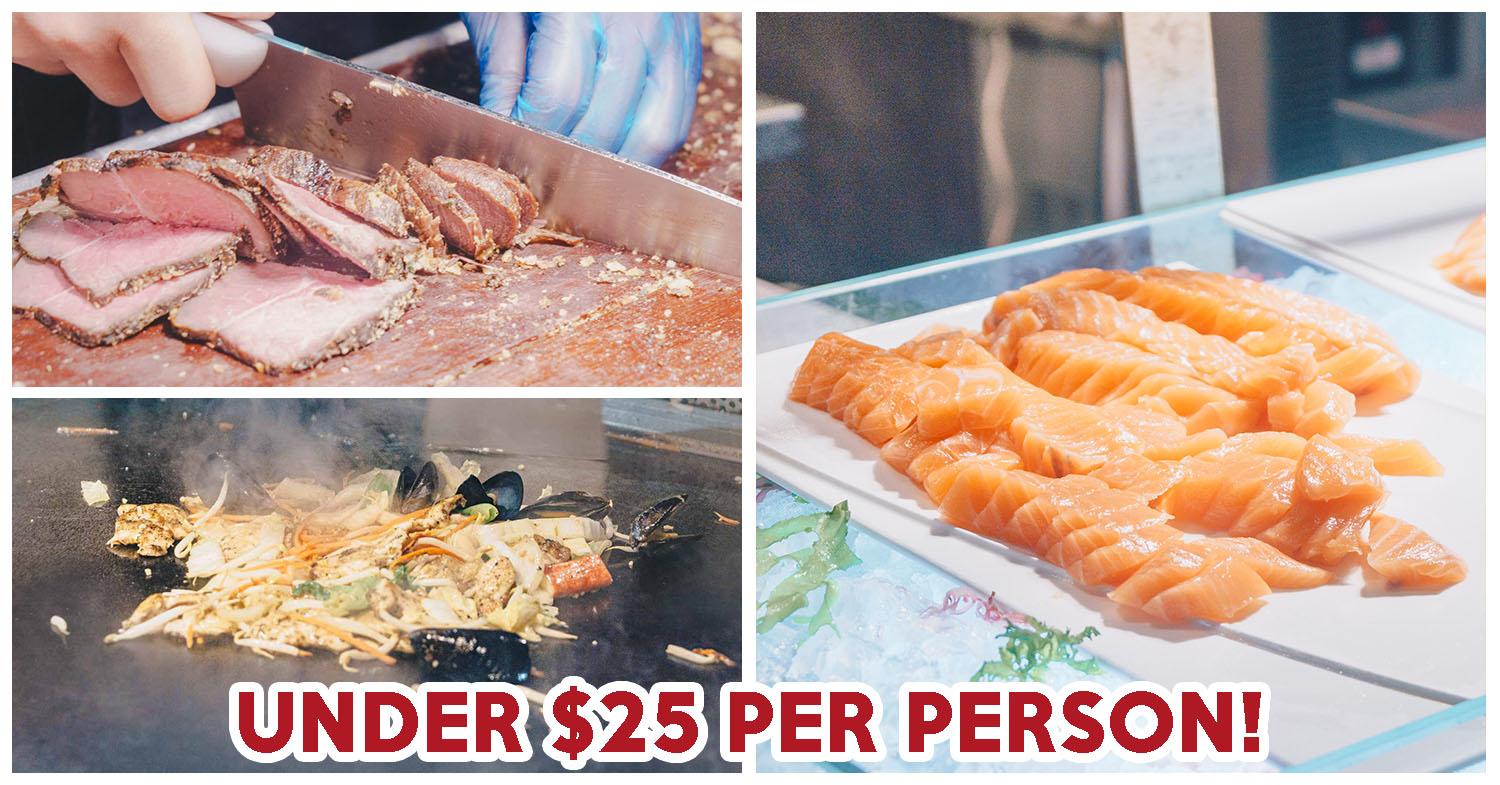 Buffet Town drew my eye with their large range of food. Teppanyaki, sashimi, and pasta are all dishes that I greatly enjoy, and Buffet Town promised all of them. The buffet joint has all sorts of delightful cuisine, with a focus on Japanese food. My colleague and I decided to head down on a Monday morning to check the place out. 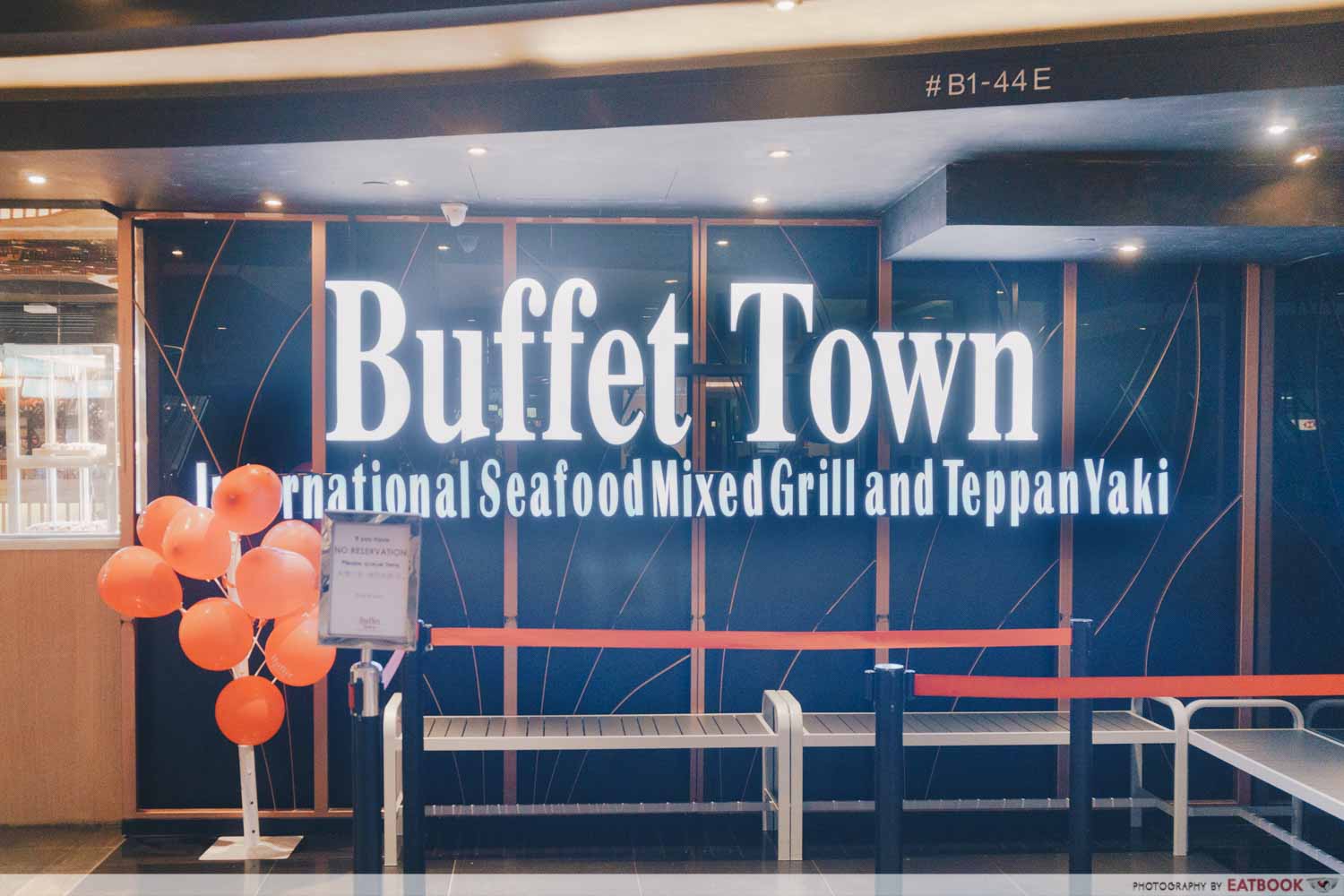 We made our reservations early. Once we arrived, we received a pleasant surprise to celebrate their ninth anniversary this year, Buffet Town is having a special promo from 10 February to 22 March 2020. The usual price for a weekday lunch is $26.80++, but thanks to the offer, its now $49 nett for two diners. The weekday dinner price of $38.80++ is lowered to $79 nett for two as well. Our meal ended up costing a lot less than we were willing to fork out for! 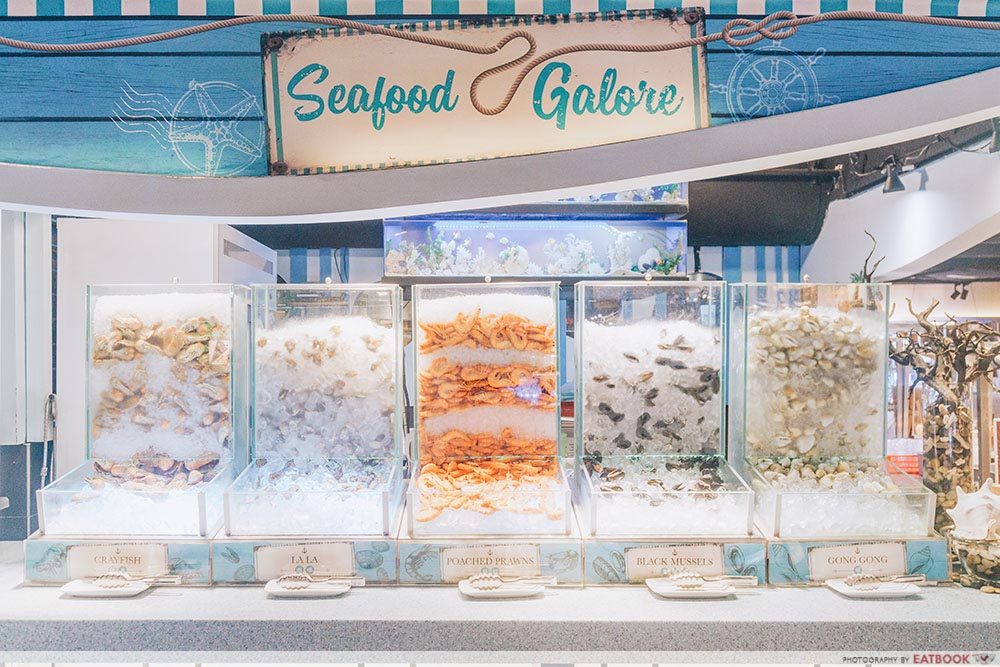 Upon entering, the first thing youll see is the imposing seafood wall to the left, loaded with crayfish, poached prawns, black mussels, lala, and gong gongs. The walls are packed to the brim with ice to ensure that the seafood is kept cool throughout the lunch buffet. 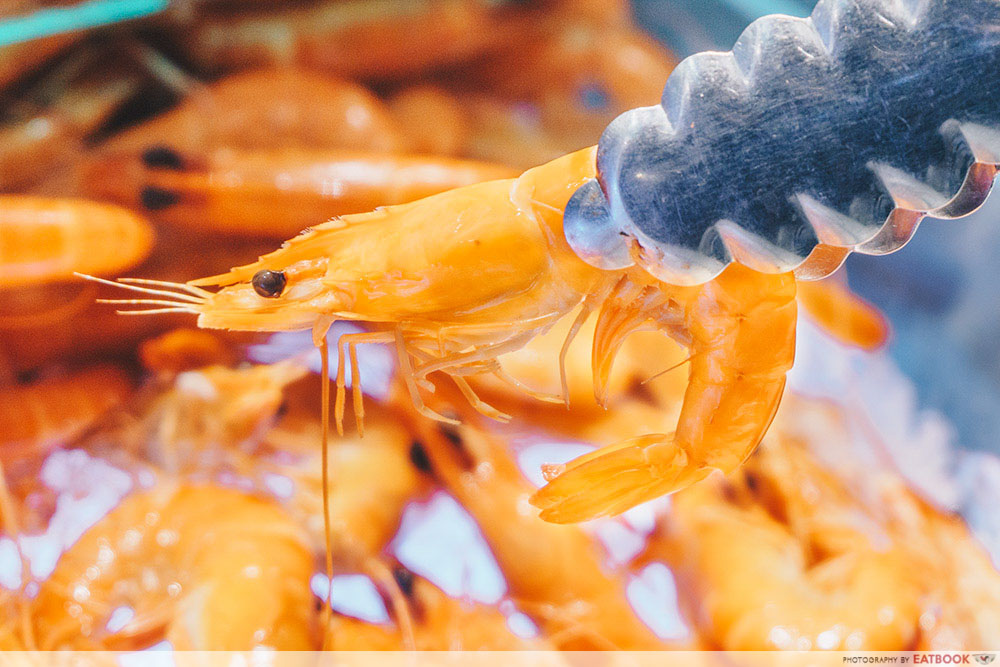 My favourite of the seafood options was definitely the Poached Prawns. They were huge and juicy, and there was more than enough for the entire crowd no need to fight for a portion. The meat was succulent and sweet, and I packed my plate with tons of them. In second place was the Crayfish. Im used to only getting only one or two pieces in seafood dishes, so it took me by surprise when I saw an unlimited supply of these succulent crustaceans. The crayfish was a lot meatier and thicker than the prawns, but it was also a bit of a challenge to get the meat out of the shell. What I did it was to bend the head upwards to break it off from the tail, and then squeeze the tail from either side to snap the hard shell.

While the prawns had a natural sweetness, the crayfish tasted quite briny. The taste was a bit sharp at times, though the texture of the meat was good. There were condiments around for the other buffet items, so I got some to pair with the meat. The cheese for the french fries went well with the crayfish, and helped to mask the more pungent aspects of the seafood.

Unfortunately, the Mussels werent very good. They didnt have much flavour to them, and the meat itself was bland. It was as though the flavour had been washed out by the poaching process. The texture was chalky as well. Other stations had mussels cooked in various ways, and those tasted far better. 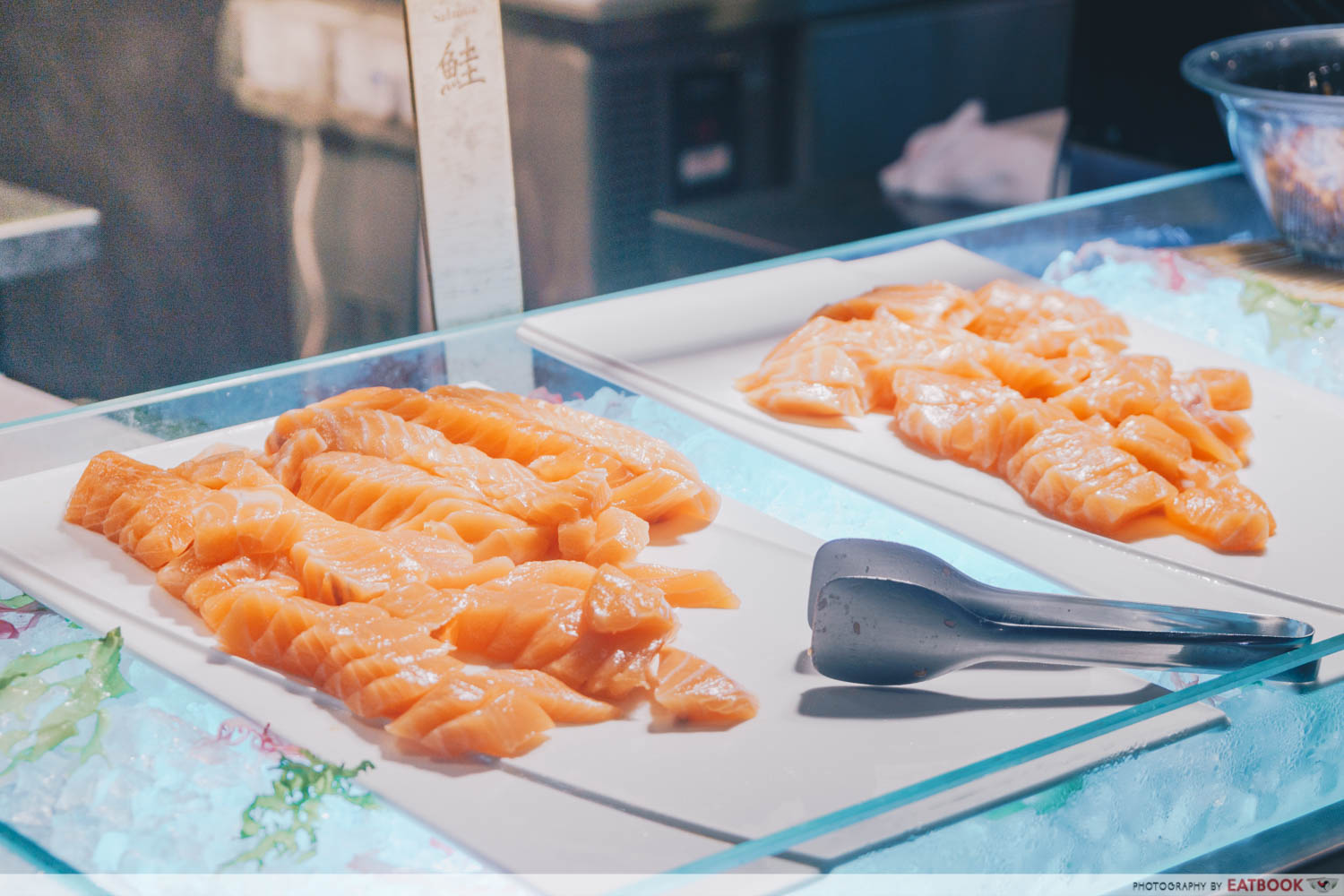 At the other side of the entrance was the sashimi section. During dinnertime, they bring out a far larger variety. However, the only type of fish at lunchtime was salmon. The Salmon Sashimi was one of the more popular items, and the chefs were constantly slicing up more to refill the platters. The sushi bar had other items such as Crabstick and Tamago Sushi, but the salmon sashimi was clearly the star of the show. 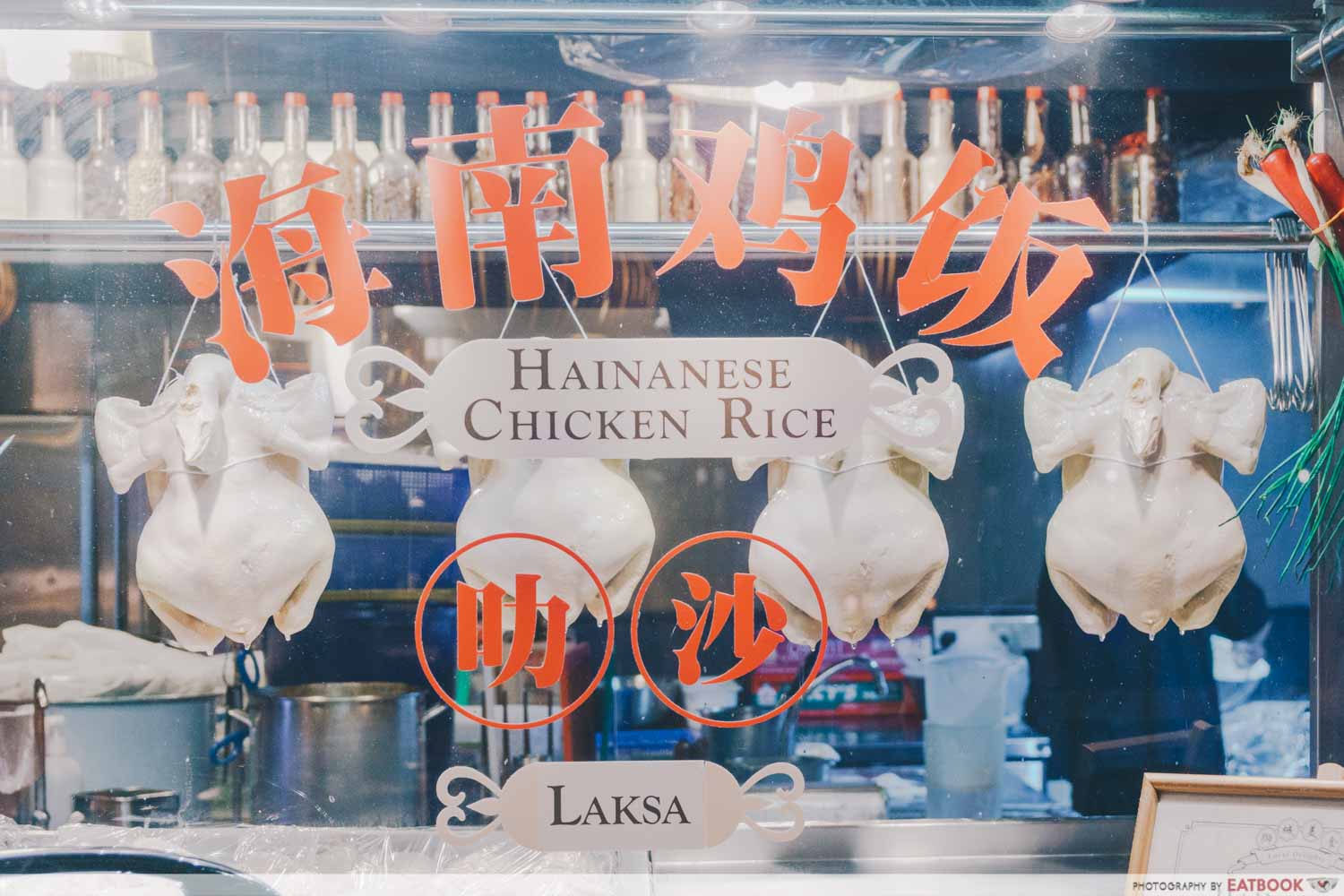 Once we finally made it past the seafood-laden entryway, I explored the huge space and checked out the various choices. There were tons of different options. The first that I checked out was the Hainanese Chicken Rice stall. They had bowls of Laksa and portions of chicken up for grabs, along with free-flow chicken rice. The chicken was tender and soft, and came with a layer of salty and savoury soya sauce. Just a short distance away was the tempura section, where they had Ebi Tempura, Abalone Mushroom Tempura, and Eggplant Tempura, along with piping hot sauce to go with it. 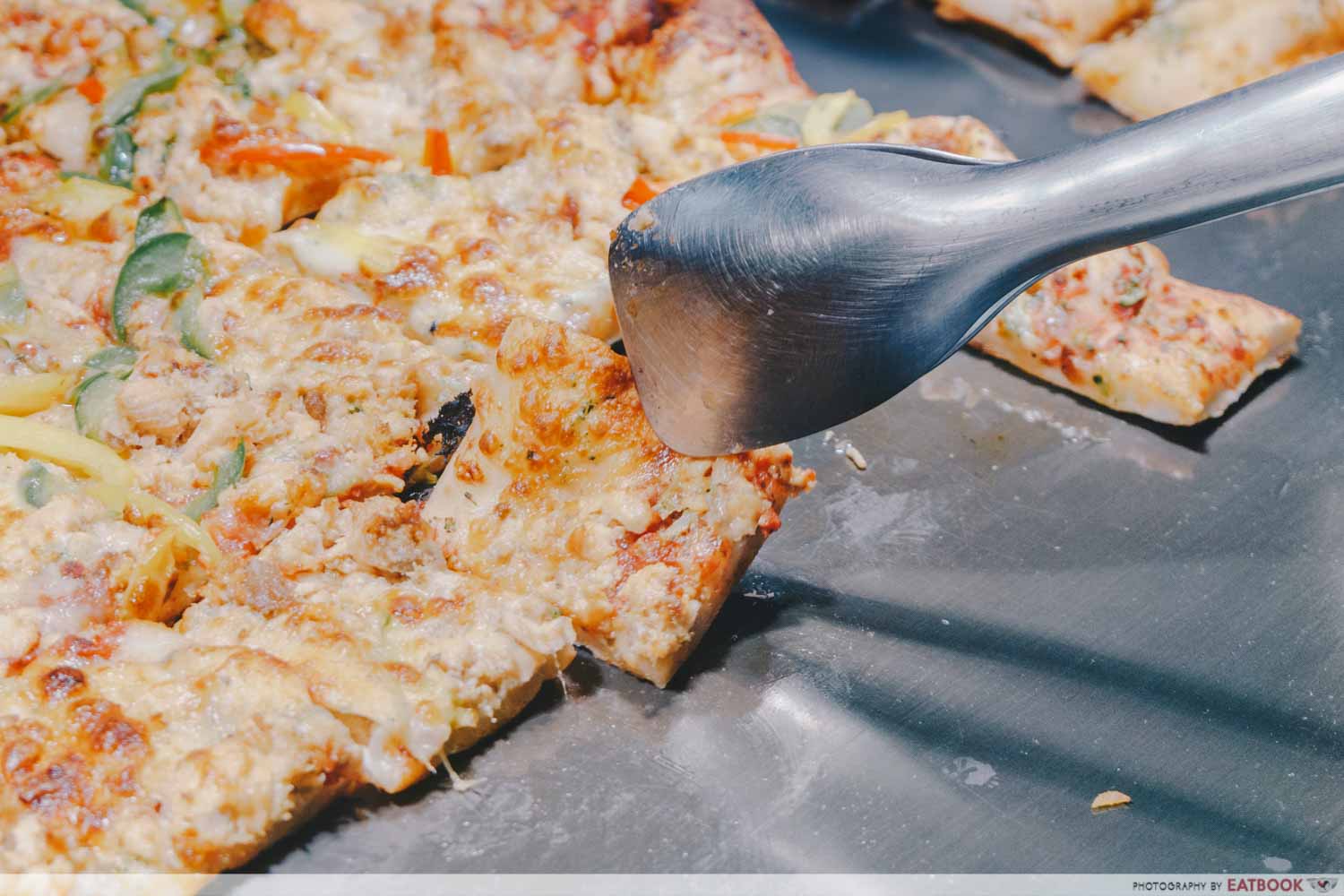 A rather large station served up Pizza, topped with capsicum and stretchy cheese. I was a bit disappointed to find that there wasnt any pasta on the day we went, but the pizza was good enough to overcome that disappointment. 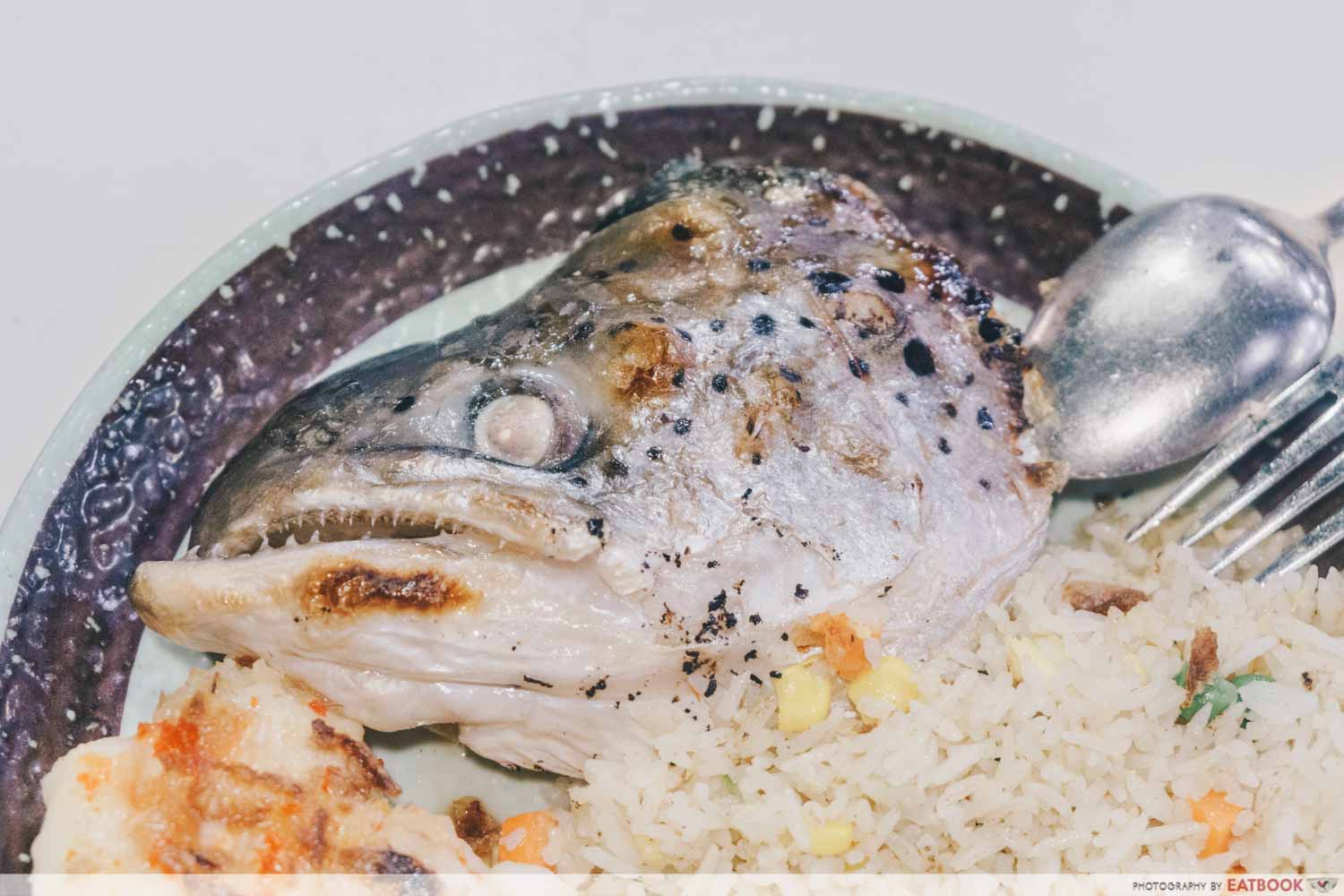 At the back of the restaurant was a section with Japanese food and assorted dishes. One of their bestsellers is the Grilled Salmon Fish Head, which is so popular that diners are limited to one serving.

The fish was tender, sweet, and had tons of fatty parts. I added teriyaki sauce and lemon juice to mine, to give more flavour to the meat. Most of it was bone, but the meaty portions were flaky, soft, and delicious, with a slight smoky char from the grilling.

Some people may be put off by eating fish head. But even if youre not a fan of having your seafood stare right back at you, give the cheek a try. The softest, most tender part of the fish is located in the cheek, whether your fish is grilled, fried, or steamed. The Satay station had all the ingredients needed to complement the tasty skewerspeanut sauce, ketupat, onions, and cucumber. I found the beef satay to be quite tough, but it remained flavourful and tasty. The chicken was a bit more tender.

The Teppanyaki station was next to it. There were a bunch of veggies to pass to the chef, who gladly cooked them on the spot. In terms of meat, there werent that many options. There were only crabsticks, chicken, and mussels. The teppanyaki wasnt that flavourful either, and while I finished one plate of it, I figured that it wouldnt be worth the stomach space to go back for seconds. 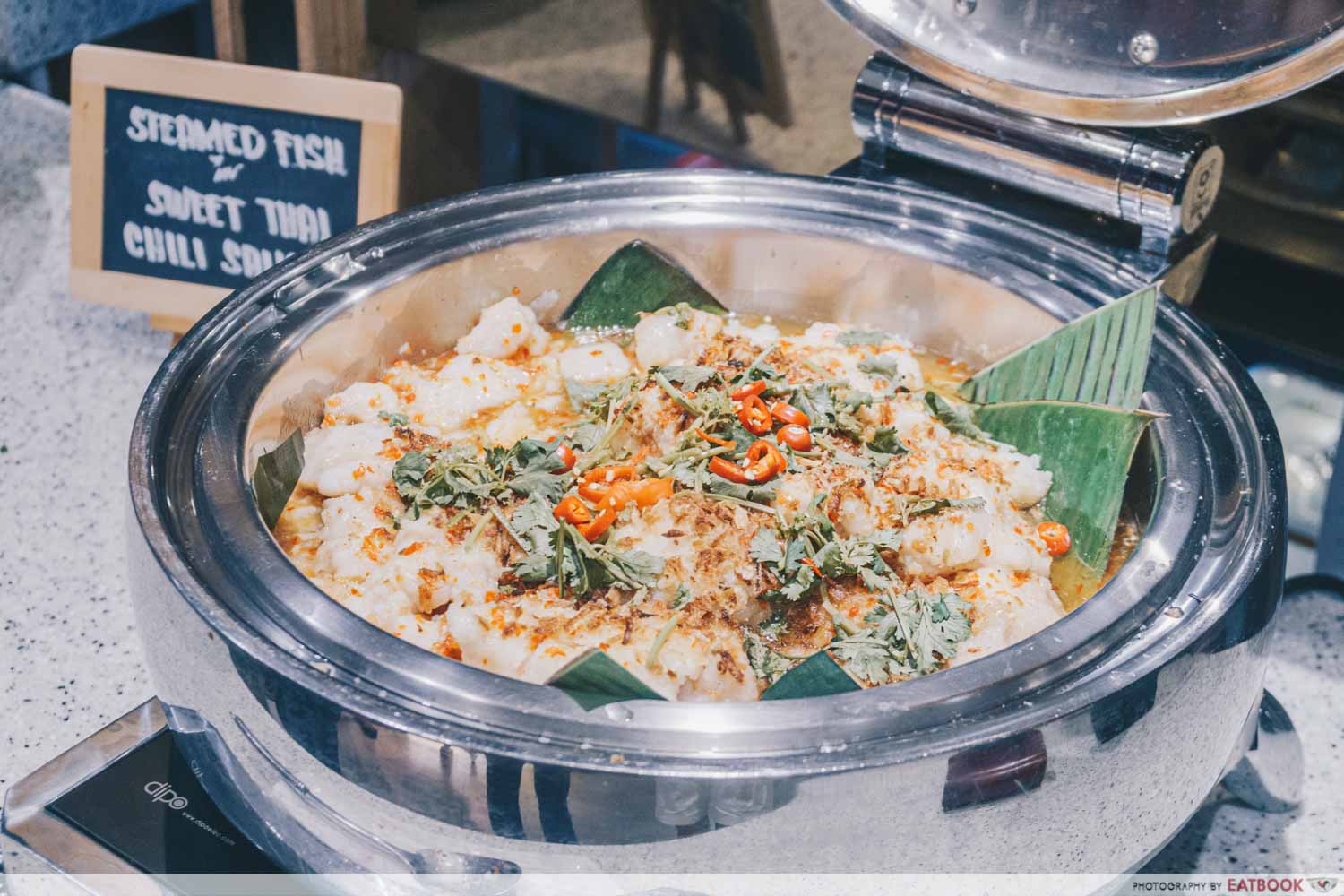 The cooked food section had dishes such as the Steamed Fish In Sweet Thai Chilli Sauce and Ayam Panggang. It was the typical assortment youd see at a catering buffet, and it definitely wasnt the main attraction at Buffet Town. Other miscellaneous stations include the Roast Beef section, the French Fry kiosk, the Bread station with a pot of Prawn Bisque soup near it, which was absolutely delicious. Theres also a station with Teochew Congee, but I wasnt too interested in it myself. 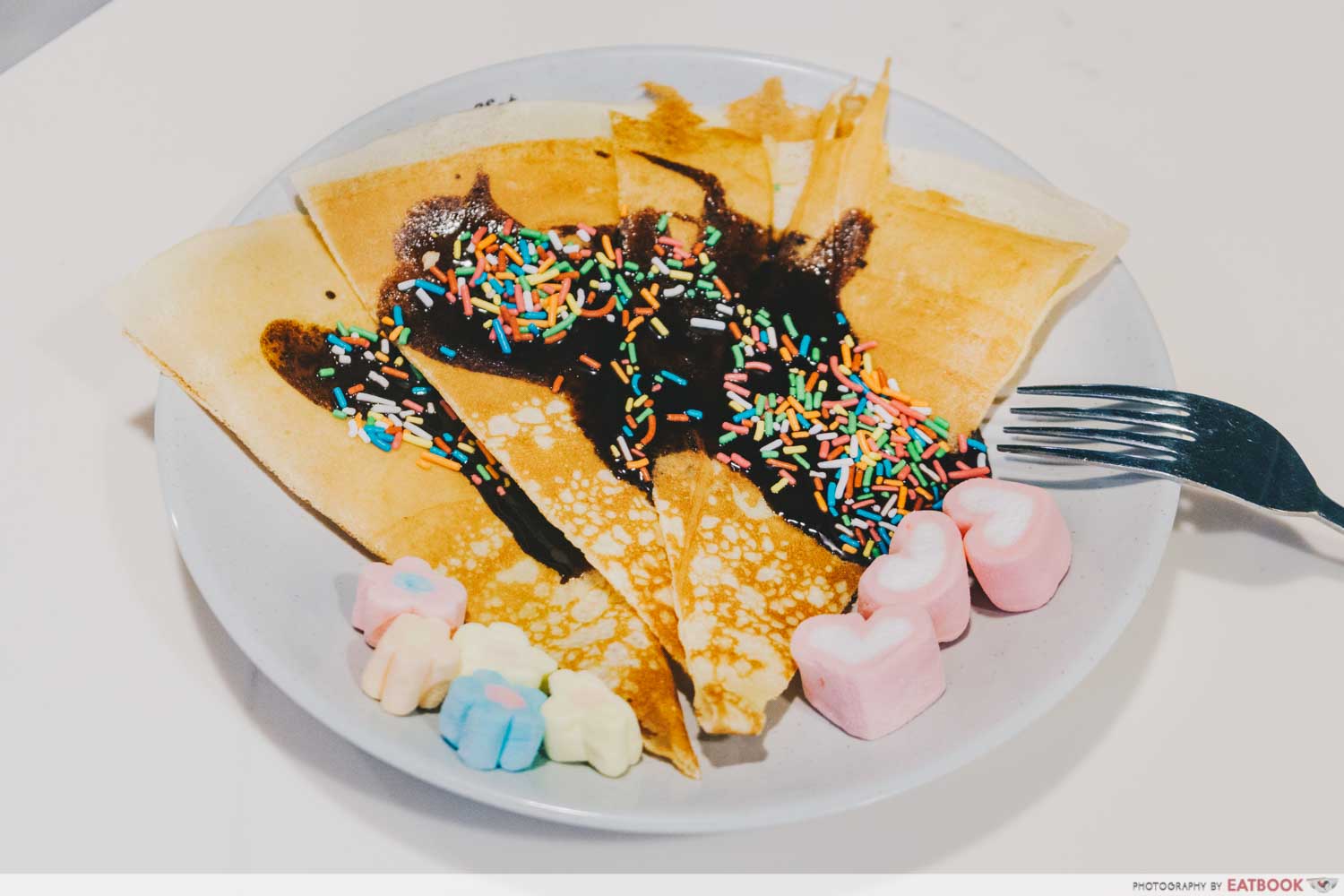 For dessert, theres an Ice Cream bar, a station that serves freshly prepared Crepes, and smaller desserts such as Mango Mousse Cake and Kueh Lapis. They also had a station for customising your own Ice Kacang with a spread of syrup, and lastly, a pot of bubbling chocolate fondue with marshmallows. Buffet Town is located in Raffles City Shopping Centre, which is just next to City Hall MRT Station. The path is sheltered and air-conditioned all the way, so its convenient to get there without stepping into the sun.

The inside of the restaurant is roomy, relaxing, and spacious. Their staff members were quick to assist us, while providing good service. Many of the stations are self-service, but you can get served at the teppanyaki station and chicken rice counter.

Make sure to get a reservation beforehand! The queues tend to be quite long. Even though we came at 11am, and the buffet didnt start till 11:30am, the line behind us gradually grew to a huge crowd. 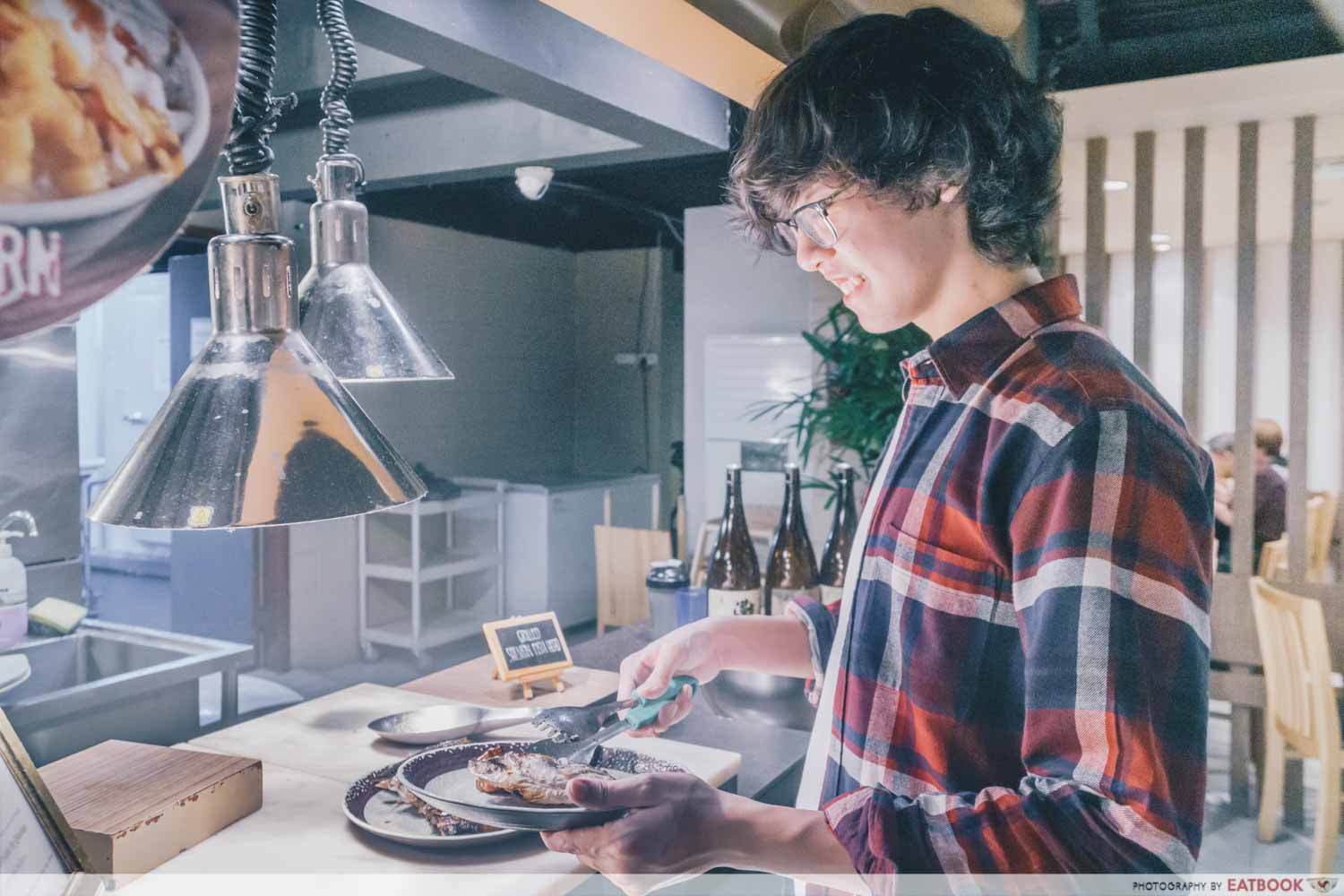 Buffet Town impressed me with its wide variety, good food, and efficient service. Some of my favourites were the salmon head, poached prawns, and the prawn bisque soup. A couple of dishes were a little disappointing, and I had hoped there would be the advertised items such as chilli crab and oysters. We found out after that they only pull out all the stops at dinnertime, as most buffets do.

Id recommend coming back at dinner and braving the price hike, so you can get the full experience. The food that I tried was good enough to justify a return visit. Buffet Town also has a Senior Lunch Special where those aged above 60 can get a buffet at $25 nett for a weekday lunch. Its a good opportunity to bring your parents out for a treat.

If youre interested in another buffet joint right nearby, check out 15 Stamford By Alvin Leung, a brunch buffet at City Hall! Also check out Project Penyek for huge platters of seafood, including tiger prawns and flower crabs.

Photos taken by Kerrianne Goh.
This is an independent review by Eatbook.sg.