Six months ago, I was hugging a wall, sneaking down unimaginably creaky steps late at night, trying in vain to be as quiet as possible. Wincing at every wooden groan, scuttling through the unfamiliar hallway, I finally took a deep breath when I arrived at my boyfriend’s bedroom – just a staircase below mine.

When I moved to Alsace, France, last fall to teach English, I fortuitously found a cheap room to rent in an apartment on the top floor of a half-French, half-British family’s house. Including the three huge dogs, I have eight roommates – a mom, a stepdad, and their two sons and daughter, who are all around my age ― (actually, nine if you count Carmelito, the boisterous rooster outside my window). One of the sons, Julien, a husky blond, welcomed me with a warm, confident smile and adorably accented English.

A week after I’d arrived at their doorstep in October, giant suitcases in hand and wearing a shy smile, I faced my first obstacle: the bank. Stereotypes of French bureaucracy dancing in my head, I was agonizing over my 9am. meeting when I nearly bumped into Julien taking a smoke break on the patio.

“I’ll drive you if you want,” he offered.

And so, at 8:30am the next day, he drove me. He also came into the bank with me and helped me translate “overdraft fees” and “Automated Teller Machine.”

Later that week, he knocked on my door: “We’re going hiking. Get ready.”

We climbed our way to the top of Hartmannswillerkopf, a peak high in the Vosges Mountains rich in World War I history, and I snuck glances at him as we peered out over the gorgeous Alsatian vista stretching all the way to the Alps.

One night, during my fall vacation, he met me on a train platform at midnight, only to drive me to the airport at 4am a few hours later so I didn’t have to shell out for a taxi.

“C’est normale. It’s no big deal,” he assured me after pulling an all-nighter to keep me company.

A month later, we were holding hands as we explored charming local Christmas markets, drinking mulled wine out of decorative plastic cups – my French slowly growing more confident as we exchanged stories about our respective countries and cultures.

It only took a few weeks for me to fall in love with my landlady’s son.

Considering the circumstances – it wasn’t exactly the ideal “meet the parents” situation, after all – we kept things undefined and covert at first. I mean, “landlady” and “mother-in-law” are some of the most-feared words in the English language, and her bedroom was just on the other side of a flimsy wall. Sometimes, while lying in bed next to Julien, I could hear her cough. I lived in constant anxiety that she, or Julien’s brother or sister – even the dogs – would get an earful of telltale sounds late at night.

Then, during a wine-soaked apéro near Christmastime, Julien’s mom leaned in close to me and gently declared in her soothing British accent, “I’m so glad you two are together. I can tell by the way you look at each other.”

Or maybe she’d heard those wooden stairs creaking at 2am one too many times. Either way, there was no use hiding our love any longer.

Seeing as I was the first girl Julien had ever brought home (though perhaps “brought,” isn’t quite the right word here), his mom was itching to show me old photos of him as a platinum-blond baby. She told me all the well-rehearsed stories from his childhood over a glass of rosé as he coyly rolled his eyes. No longer just a stranger sleeping with her son, I engaged more and more with her and the rest of the family, including the kind of big Sunday lunches I never had growing up: boeuf bourguignon, seven-hour lamb, pot roasts.

“You’re a part of the family now,” Julien assured me, pulling me close in front of everyone.

Then the coronavirus hit France.

Our town is far from a main attraction in the country, and yet it became the epicentre of the epidemic in a matter of weeks, thanks to a group of evangelicals who ended up spreading a lot more than just their religion. By mid-March, President Emmanuel Macron appeared on TV and announced a nationwide lockdown. Hospitals were overwhelmed. High-speed trains turned into trauma centres, transporting critical patients to less-affected regions all over France.

Soon smiles faded at our dinners and the chatter constantly revolved around the latest pandemic figures, gel hydroalcoolique and masks. Back then, we considered a few dozen new cases in a day a nightmare (at its peak, in early April, France’s daily cases reached almost 8,000). Schools closed; my English teaching program ended abruptly; flights back home to Philadelphia became increasingly scarce and more and more expensive, and my fear of risking international travel soared.

Gone were the days of freely exploring Alsace with Julien – no longer could we drive along the Wine Route or try new restaurants in town. Starting March 17, we couldn’t leave the house without a signed document asserting where we were going and why, under threat of a hefty fine from the government.

And so I was locked indoors with a whole new family, thousands of miles away from my real one in the States, where cases were skyrocketing by the minute.

When the virus arrived in Alsace, Julien and I had only been together a couple of months and I was busy navigating my first serious relationship since high school. Now that we are spending almost all 24 hours a day together, it feels like there is no more mystery to be found. None. We had to learn how to be comfortable with every single facet of each other (and I quickly learned much more bathroom-related vocabulary than I ever wanted to know).

I fell in love with Julien because of his confidence and charm, but sometimes, after a long day of doing nothing, his chattiness can wear me down.

“Je t’écoute pas. I’m not listening to you,” I might snap, exasperated. If he helps me cook an elaborate coq au vin or bake a Bon Appétit recipe, I can find myself harrumphing at his mistakes. And does he have to keep the TV on while he falls asleep, I wonder.

Ironically, and to make matters worse, we are practically codependent. I had always turned up my nose at couples that called each other “babe,” that couldn’t survive for even a few minutes without their other half, but here I am now, pouting every time mon chéri leaves the room. Lockdown has been working its confusing, at times sinister magic.

Tensions can also be high throughout the house, not just between Julien and me. Forbidden to go out, the six of us are essentially glued together and it has become more and more difficult to take a breather or find a shred of privacy. Sometimes, from my bedroom upstairs, I can hear screaming fights like the ones I might have with my own mom. I sit silently, feeling a bit like a kid on a playdate whose friend just started arguing with her parents. I even feel a bit like a burden sometimes. And then there are the questions about America.

“Did you hear that Trump recommended disinfectant as a coronavirus remedy?” the siblings asked with slightly mocking smiles on their faces, but mainly looks of barely concealed stupefaction. Blood rushed to my cheeks as I fielded their inquiries about my home country’s Covid-19 response, and my worry for my immunocompromised mom and my twin sister across the Atlantic increased by the minute.

And yet, despite the down days, I feel lucky.

Lucky to be in a safe, warm home with overly generous people who already feel like family and who love me when there are so many out there struggling. Lucky to deepen my relationship with Julien, lucky to finally connect with his sometimes aloof siblings, lucky to be able to cook my specialties – my grandmom’s chicken parm, beef barbacoa tacos, key lime pie – for everyone as a gesture of thanks. 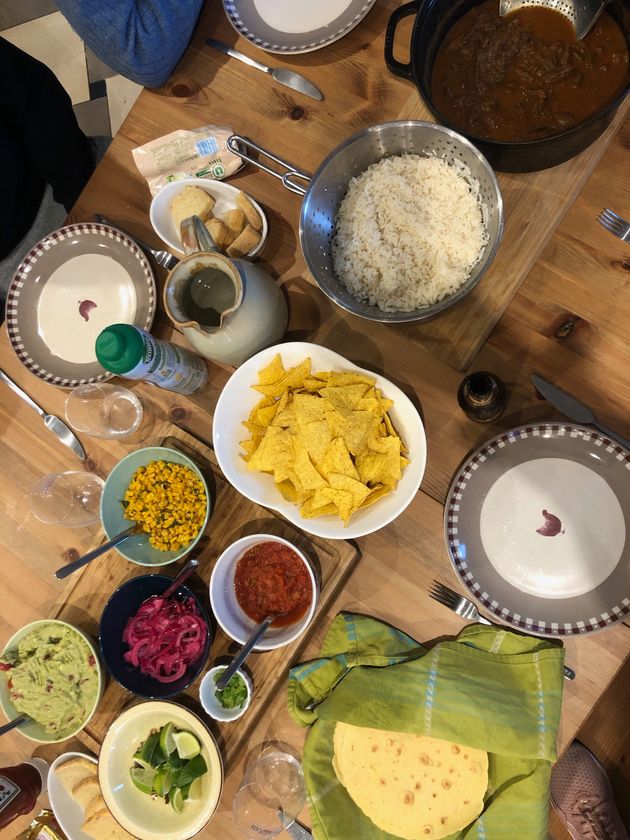 Yes, Julien and I are practically joined at the hip. Yes, sometimes we roll our eyes at each other. Yes, we live just a little too close to his parents. But shockingly, in two straight months of lockdown, we’ve never gone to bed angry. If ever I need a break, I just skip upstairs and close my apartment door.

In between our daily bouts of infectious laughter, we share our passions with each other – whether that means chopping garlic and arguing over spices in my kitchen, or lifting weights in his basement, sweaty and red-faced. Late at night, we bundle up in blankets and sit on the terrace, watching the stars traverse the sky and talk for hours. During this chaotic era of coronavirus, I can barely see beyond my front door, but I’m starting to visualise a whole life with him.

One day, while talking to my family on FaceTime, I handed the phone to Julien’s mom. My mom started to cry, overcome with emotion upon virtually meeting this woman who had taken me in, who had become almost like a second mother to me when I needed it most.

I had no idea when I went home for the holidays in December that it would be the last time I would see my loved ones for a long, long while. Countries all around the world are restricting travel, leaving Americans like me scattered across the globe, trying to weather this storm oceans apart from their relatives and friends. I’m so grateful that, despite our unconventional beginnings and through all the awkward moments, this eclectic little household has accepted me as their own – and has provided the connection I was so longing for during this time when so many are lacking it.

At this point, I’ve learned far more than I ever thought I would about my landlady – her passion for Shakespeare, her tendency to break out in song whenever the mood strikes, her preference for pink wine – and I’m learning more and more each day.

And now, I let my feet land freely and audibly on the steps as Julien and I head downstairs for a cup of coffee every morning, running into his mother, brother, sister, not caring who sees. We are ready to face the future together – as a family.

Have a compelling personal story you want to tell? Find out what we’re looking for here, and pitch us on ukpersonal@huffpost.com