One thing you might not know about me? I'm a huge fan of Bollywood movies! Back in March and April when we were all staying home and running out of things to watch on TV, I first got the idea to do a blog post with some of my Bollywood recommendations. Time got away from me a bit and I'm publishing this a bit later than I thought I would, but better late than never right? Get ready to discover your new favorite film genre. 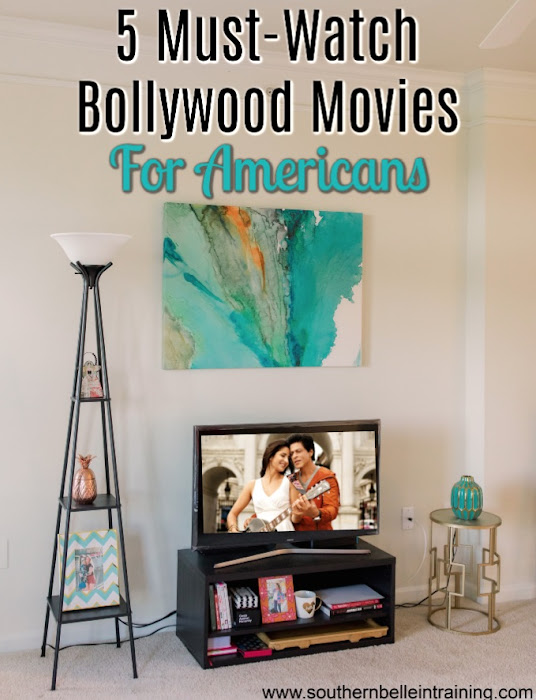 I've had an interest in India and Indian culture since I was a little girl. Despite the fact that I was an extremely picky eater as a kid with most traditional American foods (and I honestly still am in some ways today), I loved Indian food from the very first time I had it! I've always enjoyed spicy things, and as a kid I would be a lot more bold with trying different ingredients if it was served via my favorite Indian restaurant. To this day, a spicy curry and naan bread with gulab jaman or kheer for dessert is one of my favorite meals.

As I grew up, I became interested in other parts of Indian culture as well. I read every book about India, fiction and non-fiction, that I had on my bookshelf at home or could find at my local library. My late grandfather had traveled to India on different occasions for business trips in the 1980s, and he had brought my mom back a beautiful authentic saree. She let me wear it for Halloween when I was nine, and I remember being in heaven.

Although I read about Bollywood movies in all the books about India that I enjoyed as a kid, I never knew how to actually find them and watch them. Imagine my great delight when I made a new friend during my freshman year of college who ended up being a Bollywood super-fan! My friend Eddrinia also loved Indian culture and food, just like I did. And she happened to know that Netflix had at the time a huge variety of Bollywood movies to stream! She introduced me to a few favorites, and I was hooked. I spent a lot of weekends freshman year enjoying Bollywood movies in my dorm room!

These days, I don't have time to sit down and watch Bollywood films as often as I'd like to, but I do still love them. Netflix mainly just carries the newer films and some more obscure ones these days, while Amazon Prime has now picked up streaming rights to a lot of classic ones from the 2000s and 2010s that I watched in college. For each of the five films below, I'll be sure to let you know where to find it!

Here's a few things to know about Bollywood movies if you haven't seen them before. 1) They're long. The average one is close to three hours long! Some a little shorter, many even longer. But they're worth it, even if you can't finish it all in one sitting. 2) You'll be watching with subtitles, as most Bollywood movies aren't filmed in English. 3) Many films combine genres. The most popular type of Bollywood movie since the 1970s is the masala film, which combines elements of comedy, romance, action, and drama... with musical numbers! 4) Yes- most Bollywood movies are musicals! They have full on crazy song and dance numbers spaced throughout the plot. But if you're not a big fan of American musicals, don't let this scare you! I am not a Broadway or musical fan in the slightest when it comes to American movies... but I can't get enough of Bollywood.

Here are my five favorite Bollywood movies that I've seen, with number one being my very favorite of all!

1. Jab Tak Hai Jaan (2012 - Amazon Prime - Shah Rukh Khan, Anushka Sharma, Katrina Kaif) - My favorite Bollywood movie... I'm not sure I'll ever find one that I love more. This movie is romantic and beautiful, and also deep and emotional. Jab Tak Hai Jaan was the swan song project for acclaimed Bollywood director Yash Chopra, who passed away during production of the film.
Jab Tak Hai Jaan tells the story of a complicated love triangle that spans a few decades, between India and the UK. One of the female leads realizes that her prayers and sacrifice to save her lover's life might have turned out differently than expected. That's all I want to tell you without giving more of the plot away- but believe me this film is incredible. The music in this film is also phenomenal- this song is my favorite love song ever in a Bollywood film, and this upbeat song is another great one.
I was so excited to learn that the three leads of this film reunited to play the three lead rolls in the film Zero, which came out in 2018. (Zero isn't a sequel to Jab Tak Hai Jaan, it's a completely unrelated film that just happened to cast the same three lead actors.) Sadly- I did not like Zero at all and can't recommend it. It's one of my least favorite Bollywood films- I didn't like any of the music and found the plot to be choppy and hard to follow. Ah well!

2. Ladies vs. Ricky Bahl (2011 - Amazon Prime - Ranveer Singh, Anushka Sharma, Parineeti Chopra) My second favorite Bollywood movie, and if you prefer romantic comedies and something a little less emotional this one might be a better one to start with than Jab Tak Hai Jaan. This is the Bollywood version of John Tucker Must Die. It's about a conman of many names who is a serial dater and always manages to scam his girlfriends and their families for money, before disappearing. Three of his ex girlfriends get in touch with each other, and set up an elaborate plot to try to con the conman back. Funny story about this movie: it gave me totally unrealistic expectations for what going out dancing at a nightclub would be like- watch a little bit of the dancing in this clip to see what I mean!

3. Chashme Baddoor (2013 - Available for rental or purchase - Ali Zafar, Divyenndu, Siddharth, Taapsee Pannu) Another great Bollywood romantic comedy pick! Like Ladies vs. Ricky Bahl, this one has some good laugh out loud moments. Chashme Badoor is actually a remake of a 1981 Bollywood film called Chashme Buddoor. I haven't seen the original, but I sure do enjoy this one! It's about a woman who is trying to escape her father's plans for an arranged marriage, and she ends up falling in love with a guy she meets randomly. Only problem? Both of the guy's roommates are hardcore crushing on her!

4. Befikre (2016 - Amazon Prime - Ranveer Singh, Vaani Kapoor) If you love anything to do with Paris, this is a must-watch as it's set there. I personally loved watching a Bollywood movie be set amongst the beauty of France- it was a cool fusion of the two cultures! This movie is about a struggling comedian who has recently moved to Paris from India. He ends up meeting and falling in love with an Indian woman who has grown up in France, but their relationship has a turbulent break-up. They both end up meeting and dating other people... will they find their way back to each other?

5. Badrinath Ki Dulhania (2017 - Amazon Prime - Varun Dhawan, Alia Bhatt) This is more of a romantic drama than a comedy. This movie is about two young people who are both being forced into an arranged marriage. It's something that had happened to both of their older siblings as well. A plot twist happens when the leading lady doesn't show up at the altar on her wedding day- she's escaped India to pursue her education in Singapore! Her groom-to-be ends up following her there, and some crazy things ensue. I'm listing this one as the last pick on my list because this movie really showed me how lucky I am to be growing up as a young woman in America, where I have the freedom to fully pursue my career dreams, and cultural stereotypes won't force me into an arranged marriage. Obviously today there are many parts of India that have accepted modern dating culture over arranged marriage, but there are still places in the country where that is commonplace, as displayed in this film. Not only was this a great movie, but it made me feel really thankful for my own freedom!


Like many of my recommendation posts, this ended up being a bit longer and wordier than I thought, but I guess I just had a lot to share! I truly do love Bollywood movies so much, and it's quite overdue that I bring that love to the blog.

Have you ever seen a Bollywood movie before? If so- share your favorites with me!